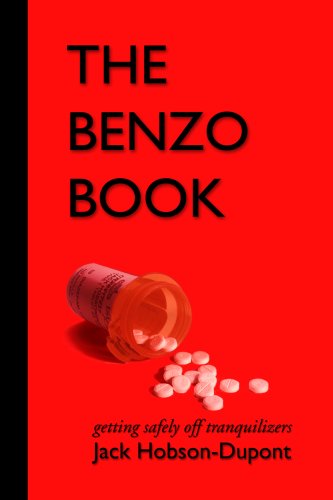 Are you a drug addict? No? Are you sure about that?
Millions of people are at risk of dangerous dependency from commonly prescribed tranquilizers and sleeping pills. The Benzo Book, by Jack Hobson-Dupont, examines this problem in depth and detail, and provides methodology for getting safely off such drugs.

Countless people take tranquilizers every day. Considered ‘safe and effective,’ they are prescribed for everything from anxiety to muscle spasms. Stopping tranquilizers is usually not a big deal. But for a significant number of people, trying to discontinue their use may be a hundred –a thousand– times harder than heroin or cocaine. Withdrawal can be severe and can last for months, even years.

How is it that this problem is largely ignored in the United States? Doctors appear to have no clue that withdrawal from benzodiazepine drugs, the most common tranquilizers and sleeping pills, can ever involve more than a week or two of discomfort. Those patients who experience a more prolonged reaction are told that their problems are the reemergence of a pre-existing condition whose symptoms had been held at bay by benzodiazepine. And yet, the symptoms of Benzodiazepine Withdrawal Syndrome are often so bizarre and numerous, there is no pre-existing condition which would explain them. Anybody taking medications such as Ativan, Klonopin, Xanax, Valium, Rivotril, Rohypnol, Dalmane, Mogadon, Halcion, or Librium for a period greater than two weeks is at risk of experiencing symptoms of addiction should they attempt to stop.

In The Benzo Book, author Jack Hobson-Dupont points out that, to someone struggling with such symptoms, the difference between “addiction” and “dependency” is merely one of semantics. He recounts his own experience at finding himself unwittingly addicted to a benzodiazepine his doctor had prescribed, and details the method he and others have used to get safely off the drug. He then explores in considerable depth and detail the medical, sociological and economic factors that conspire to create the conditions in which addiction to pharmaceutical products can be widespread and yet still remain largely unknown, unreported and untreated.

Anyone taking tranquilizers or sleeping pills, even under a doctor’s supervision, could benefit from the information in The Benzo Book– information no doctor is likely to know, let alone to offer.