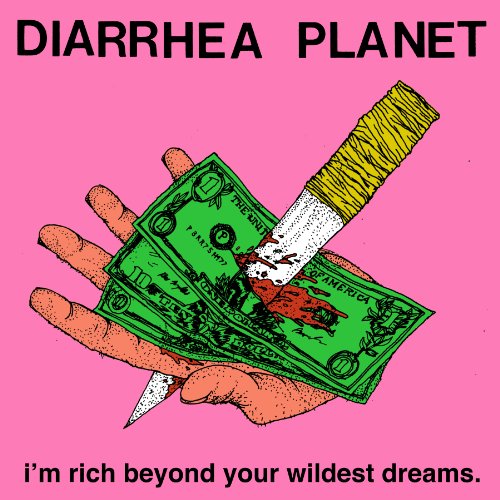 Diarrhea Planet is a four guitar, bass and drums rock tornado from Nashville, TN that ‘have the greatest live show on Earth’ according to PITCHFORK. THE NEW YORK TIMES says ‘ “Nothing about the Nashville band Diarrhea Planet is commentary. The sheer energy that pulses through its second album, “I’m Rich Beyond Your Wildest Dreams” (Infinity Cat), feels young, though not exactly juvenile. A sweaty, sweaty rock band with four people playing guitar, this group resides somewhere near the intersection of Weezer and Ted Nugent. The result is small-scale monster rock, in which the guitar solos are tactile and come off like stadium cheers, and the drums crash with severity. But Diarrhea Planet isn’t arch like, say, the Darkness, which saw the humor in the era it was borrowing from and rendered it with a straight face. Even on the songs with dark edges, like “Kids” and “The Sound of My Ceiling Fan,” Diarrhea Planet is very much still breathing heavily, earnest in its enthusiasm. And at the songs’ conclusions, they effectively collapse from exhaustion.” ‘If you measure a live show’s success by how happy to be alive it makes you, than Nashville’s Diarrhea Planet have the greatest live show on Earth. At this year’s South by Southwest, the tales circulating about their exploits reached Bill Brasky levels. When I saw them, I was blissfully unaware of their name; I was, however, convinced that whoever these kids were, I was going to make it my personal mission to see them live as many times as possible. Recently, they came to Brooklyn’s Shea Stadium, and Patrick Stickles, one of their most avowed fans,came onstage to sing “Born To Run”. To enthuse about a band with the name Diarrhea Planet is to abandon dignity, and also to surrender to childish joyousness- which, you have to assume, is the point: They have four guitarists, three of whom seem to be playing the same power chords while the fourth finger-taps “Muppet Babies” versions of Van Halen solos. A Diarrhea Planet mp3 is not a Diarrhea Planet show, of course, but it is a pretty good approximation. On “Separations,” all the elements are here: the high-calorie, low-nutrition riffing, the purposefully cretinous singing, the infectious melodies, the pop-punk study-hall camaraderie.” Yeah, see? It’s not just me.’ (PITCHFORK) SPIN MAGAZINES ‘ALBUM OF THE MONTH’ NASHVILLE SCENE: ‘BEST ABLUM OF THE YEAR’ ‘I’m Rich Beyond Your Wildest Dreams, DP’s second album, finds them expanding on the mostly one-minute-and-change outbursts that characterized Loose Jewels and their early EPs. The lengthier tracks give them time for more things like: 1. Guitar solos 2. Hitting high falsetto notes, like the dude from The Darkness 3. More guitar solos 4. Fretboard tapping 5. Hip-hop-esque shout-outs to friends and contributors 6. A few more guitar solos Any band with that many people playing guitar at once is obviously aiming at rocking out on a Homeric level, but I’m Rich lays bare the impulse like never before by embracing the sweet sounds of 1970s rock. Other reviewers have compared them to Cheap Trick and Kiss. This is all true. I’ll go ahead and throw Thin Lizzy in there, too. (TINY MIX TAPES)