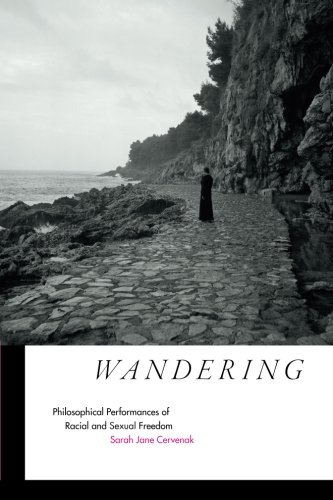 Combining black feminist theory, philosophy, and performance studies, Sarah Jane Cervenak ruminates on the significance of physical and mental roaming for black freedom. She is particularly interested in the power of wandering or daydreaming for those whose mobility has been under severe constraint, from the slave era to the present. Since the Enlightenment, wandering has been considered dangerous and even criminal when associated with people of color. Cervenak engages artist-philosophers who focus on wayward movement and daydreaming, or mental travel, that transcend state-imposed limitations on physical, geographic movement. From Sojourner Truth’s spiritual and physical roaming to the rambling protagonist of Gayl Jones’s novel Mosquito, Cervenak highlights modes of wandering that subvert Enlightenment-based protocols of rationality, composure, and upstanding comportment. Turning to the artists Pope.L (William Pope.L), Adrian Piper, and Carrie Mae Weems, Cervenak argues that their work produces an otherworldly movement, an errant kinesis that exceeds locomotive constraints, resisting the straightening-out processes of post-Enlightenment, white-supremacist, capitalist, sexist, and heteronormative modernity. Their roaming animates another terrain, one where free, black movement is not necessarily connected to that which can be seen, touched, known, and materially valued.