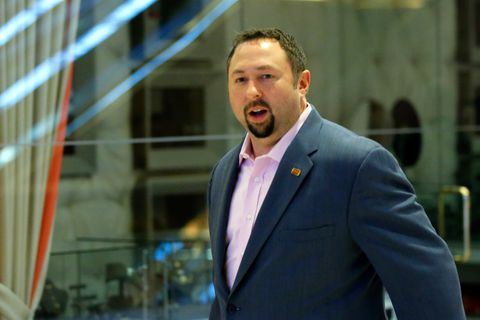 Two former Trump staffers’ court battle just took quite the turn. The Trump campaign members in question, Jason Miller and A.J. Delgado, had an extramarital affair and have been in a custody battle over their child. Earlier this month Delgado’s legal team filed a request for Miller to take a psychological evaluation. The reason? Delgado’s team is accusing Miller of sneaking an abortion pill into a woman’s smoothie after impregnating her.

According to the court documents found by Splinter, while Miller was working for Jamestown Associates, he would sometimes take clients to strip clubs. The documents claim that on one such night, Miller went to Rachel’s Gentleman’s Club in Orlando, Florida, and subsequently began a sexual relationship with a stripper referred to as Jane Doe. Doe became pregnant, and the court documents claim that shortly after her pregnancy, Miller, who was married at the time, showed up at her apartment with a smoothie that, unbeknownst to her, contained an abortion pill.

According to Delgado’s legal team, the abortion pill induced an abortion and Doe ended up in a hospital emergency room, “bleeding heavily” and nearly going into a coma. The unborn child died, and Doe was “hospitalized for two days, the abortion pill possibly reacting with potential street drugs in her system at the time she drank the Smoothie.” The court documents also allege that Jane Doe was “enraged” and that Miller “attempted to have Jane Doe sign an NDA.”

Splinter was the first outlet to report the story, and Miller’s legal team contacted them to dispute the claims, saying “To be clear, there is no validity to the false accusations made in Ms. Delgado’s filing…We also know the identity of the ‘Jane Doe’ referenced in the filing, have located her, and Mr. Miller is absolutely certain that he does not know her, never had a relationship with her, and never engaged in the actions Ms. Delgado—and now you—falsely accuse him of committing,”

But the plot thickens: The court documents also state that Delgado has been working with a journalist to confirm the story about Miller, and that the journalist—referred to as Journalist A—went to Florida to investigate. The documents claim that when Journalist A found Jane Doe and asked her to confirm the story, “Jane Doe’s instant reaction was ‘Yes, that happened to me—how did you know? Who told you?”

Yashar Ali has come out as the journalist in question, posting a response to a tweet from Jason Miller saying, “Jason is referring to me in this tweet. I have not disproven such claims and to say so is inaccurate. The only way to disprove such a claim is to definitely prove that Jason was not in the state of Florida during the time period.”

Jason is referring to me in this tweet. I have not disproven such claims and to say so is inaccurate. The only way to disprove such a claim is to definitely prove that Jason was not in the state of Florida during the time period. https://t.co/fmH8fU98Iy

This story will be updated as further details emerge.