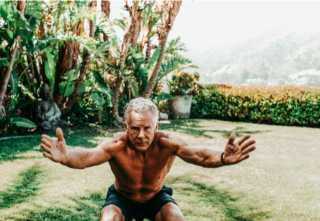 I’m 65, and though I’ve been able to stave off the worst of what normally passes for the “aging process”—as can almost anyone by paying attention to how you eat, sleep, train, move, and live—the fact remains that I’m not training like I used to.

It’s not so much that I’m “losing” a step, although it happens to the best of us. It’s that I’ve totally transcended the need or desire to train hard for the sake of training hard. There are no more competitions. My ego is content on the training front. I’m not wrapped up in pounds lifted or miles run.

I get regular questions about what I do for workouts and how they’ve changed over time. Today I thought I’d answer this.

Miami has a fantastic gym culture with impressive facilities to support it. I almost have to go the gym. It’s something I still enjoy. I just make it count.

I’ve managed to compress my time in the gym with “super-sets” for each exercise.

These aren’t always super-sets where you’re bouncing between the squat rack and the bench press every other set. The kind of super-set I’m talking about is a rest-pause super-set. I try to hit between 12-20 total reps—that’s my goal—in three mini-sets with minimal rest. The super-set is broken up into three subsets with very short rest periods.

I’ve fallen in love with the trap bar.

At this point in the game, I don’t need to hit PRs on the straight bar deadlift. Trap bars just feel safer, more natural, more versatile. Some great possibilities (many of which I throw in) include:

The average person can get 90-95% of the benefits using a trap bar instead of a straight bar. Maybe higher, even.

I lift for a different purpose now.

As for the weights I use, now that my PR days are behind me, I lift to avoid injury now more than anything. That means knowing what “heavy” really is and backing down a hair. I’ll do one or two upper body days, and one leg day each week. That’s it. Two, maximum three strength sessions.

I base my workouts around standup paddling and Ultimate Frisbee games.

Both of these are stressful enough (in a good way) that I want to be rested for (and from) those activities before I engage in a lifting session. Just to be clear, I play Ultimate all-out for up to two hours, so it’s become my sprint day.

The Miami Ultimate Frisbee scene is very high-level. I’ve fallen in with a regular pickup squad, and the level of competition rivals Malibu’s. So, that aspect of my activity hasn’t changed. I’m still getting my one day of Ultimate a week.

If I’m feeling up to it, Miami beaches are fantastic for sprints. You don’t go as fast because the sand is so powdery, but it makes you work even harder.

Miami has also really changed how I spend time with my favorite activity, standup paddling.

In Malibu, it was a bit wilder. I’d head out past the breakers and paddle in any direction. It was huge, free, open, and infinite.

In Miami, you have the ocean side which is great and much calmer than Malibu, but you also have these inland waterways, like huge canals running through Miami. I’ve been spending a ton of time exploring them, checking out the beautiful homes and boats and even the occasional manatee popping up. And because it’s so calm, I can really go hard without worrying about waves. While paddling is fun, I go pretty hard for at least an hour and up to 90 minutes, so it’s a serious aerobic day for me.

I can walk so much more in Miami. In Malibu, I had to drive somewhere to walk, whether it was a trail head for a hike, down to the beach for a stroll, or to Venice or Santa Monica to just wander. In Miami, Carrie and I can walk out the door and go the market, the water, the book store, the cafe, or just wander. It’s integrated into our day, not something we have to schedule. People don’t really think of Miami as a ‘walking city,” and it’s certainly no New York or San Francisco, but it beats the pants off Southern California.

Trap bar, rest-pause sets, and environment aside, what I train hasn’t changed all that much. I’m still lifting heavy things, running really fast, moving frequently at a slow pace, and doing activities I love. But somehow I’m doing a better job of seamlessly integrating them into my daily existence. I’ve minimized the amount of time I spend lifting without compromising my results. I’m using my compressed training to fuel the activities I love doing, giving me more time that’s also higher quality.

A lot of this could be the simple result of moving somewhere new after living in the same city for twenty years, sort of a honeymoon phase. We’ll see. My workouts here are even more a part of my general lifestyle. They’re, for the most part, parts of my life rather than interruptions to it, which is the ancestral model at its modern best maybe. That’s how I choose to see it.

Thanks for stopping by today, folks. I’d love to read your feedback and questions and hear what new routines you’re trying out. Take care.