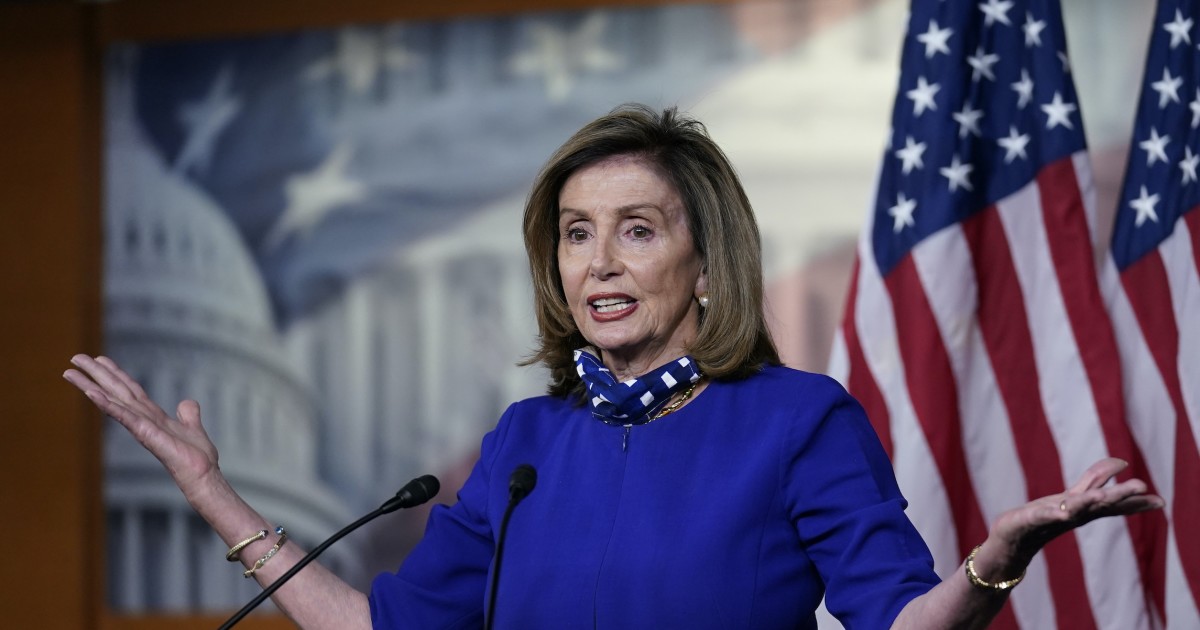 House Speaker Nancy Pelosi said she won’t back down on her demand that Republicans agree to at least $ 2 trillion in the next round of coronavirus aid. “Why should there be a bill that has far less than what the public needs?” she asked at a press conference.

After a 25-minute phone call with White House chief of staff Mark Meadows, Pelosi issued a statement saying, “This conversation made clear that the White House continues to disregard the needs of the American people as the coronavirus crisis devastates lives and livelihoods.”

The call was the first step since negotiations between Democrats, led by Pelosi and Senate Minority Leader Chuck Schumer, and the White House, led by Meadows and Treasury Secretary Steven Mnuchin, collapsed earlier this month amid disagreements on unemployment aid, school funding, and aid for state governments, among other issues.

White House economic adviser Larry Kudlow said on Thursday that the economy is strong enough to go without another fiscal stimulus package from the federal government.

Senate Republicans introduced a $ 1 trillion coronavirus aid package in July after Democrats passed a package for $ 3 trillion, which Pelosi then raised to $ 3.7 trillion. She said Thursday the GOP proposal offers far too little to help the nation cope with the continuing outbreak.

“We need a flood of money for this,” Pelosi said. “We have a pandemic and the economic consequences of again and again bad numbers in terms of unemployment today. And they’re coming in with an eyedropper.”

New applications for unemployment benefits dipped only slightly to 1 million last week, the Department of Labor reported Thursday. Jobless claims have been hovering near the 1 million mark in recent weeks. That rate is much less than the 7 million claims in one week in late March, but still far higher than the rate seen pre-pandemic, which was around the low-200,000s.

Total employment is down about 13 million since February, and unemployment is above 10%, even after record job growth in recent months. While jobs recovery has been strong, it hasn’t been nearly strong enough to erase the extreme losses.

The number of total coronavirus cases in the United States is about 5.86 million, with over 180,000 deaths.

New York Gov. Andrew Cuomo laid out conditions for closing universities in the event of a COVID-19 outbreak on campus, as several universities have begun to close down just weeks after reopening due to new coronavirus cases in residence halls and in off-campus housing.

If a college experiences 100 COVID-19 cases or an outbreak equal to 5% of the school’s population, whichever is less, the college must shift to remote learning for two weeks while the situation is evaluated.

“We should anticipate clusters,” Cuomo told reporters Thursday. “When you have large congregations of people, we know that that’s what we’re seeing … Be prepared for it, get ahead of it.”

President Trump plans to announce Thursday the purchase of at least 150 million rapid coronavirus tests from Abbott Laboratories for $ 750 million. He will use his speech at the Republican National Convention Thursday night to announce the deal just one day after Abbott received Food and Drug Administration approval for a portable COVID-19 test.

Centers for Disease Control and Prevention Director Dr. Robert Redfield partially reversed a change to the agency’s coronavirus guidelines amid accusations that the agency was limiting access to tests by saying people without symptoms of the virus should not be tested.

Redfield said in a statement given to the Washington Examiner on Thursday that “testing may be considered for all close contacts of confirmed or probable COVID-19 patients.”

“Everyone who wants a test does not necessarily need a test,” Redfield said. “The key is to engage the needed public health community in the decision with the appropriate follow-up action.”

Over the past week, Iowa has seen an average of 760 cases per day, according to data from the New York Times. This is an increase of about 70% from the average two weeks ago.

“The epidemic is gaining ground, and now, we must intervene,” Castex said. He added that France “must do everything to avoid a new confinement.”

At the same time that mask mandates are being adopted, there have been no delays or cancellations announced for the more than 12 million students who will return to French schools next week.

Six feet of distance from person to person may not be enough to prevent coronavirus transmission, public health experts warn. Infectious disease experts argue that the 6-feet protocols are based on outdated science and observations of different viruses, the Washington Post reported.

The experts wrote in the medical journal BMJ that factors, such as air circulation, ventilation, exposure time, crowd density, whether people are wearing face masks and whether they are silent, speaking, shouting, or singing, should all be part of assessing whether 6 feet is sufficient.

The governor of the U.S. Pacific island territory of Guam signed an executive order Thursday that gives a 30-day extension to a coronavirus public health emergency set to expire on Sunday, Stars and Stripes reported.

The island has seen spikes in coronavirus levels after largely avoiding major outbreaks early on, thanks, in part, to its distance from the U.S. mainland. The COVID-19 caseload has shot up 2,400% over the past month, according to the Washington Post. Meanwhile, the caseload has climbed nearly 190% in both the U.S. Virgin Islands and in Hawaii.

The mayor of Honolulu, Kirk Caldwell, reinstated a stay-at-home order Thursday for the state’s most populous island, Oahu, once again shutting down restaurants, gyms, and nail salons in an effort to halt transmission, Honolulu’s KHON2 reported.