100 MILLION Americans are fully vaccinated: White House announces 30% of US adults are inoculated against Covid as deaths fall to their lowest level of 2021 at 628 a day

Daily average COVID-19 deaths in the U.S. fell to a low of 628 for this year on Thursday, according to the Centers for Disease Control and Prevention (CDC).

Over the past seven days, 4,838 Americans died of coronavirus. It’s still staggering figure, but is less than a quarter as many fatalities as the U.S. was seeing each week for much of  January and  February.

In fact, that’s the lowest daily average of deaths since July 2020, according to CDC data.

Cases are declining too, with the seven-day rolling average falling to 51,228, the fewest since October 15.

Although only 30 percent of the U.S. population has been fully vaccinated against COVID-19, it’s now undeniable that the shots are starting to have an effect.

‘We are treating the battle against the virus like the war that it is,’ said White House Covid response coordinator Jeff Zients during the Friday press briefing.

He praised the U.S. vaccination effort for beating President Biden’s ‘ambitious goal’ of 200 million shots-in-arms in his first 100 days in office, but it’s long been clear that he U.S. was on pace to administer at least that many doses by now.

But the rate of daily vaccinations has fallen off in the past week. The U.S. is now giving 2.6 million doses a day, down from more than three million – and it threatens to stall the fight to control the pandemic, especially as variants spread in the U.S.

Still, ‘if we can continue at this pace, case rates are coming down, vaccinations going up, then I think July 1 would be a reasonable target,’ to get the U.S. fully reopened said CDC Director Dr Rochelle Walensky during the Friday briefing. 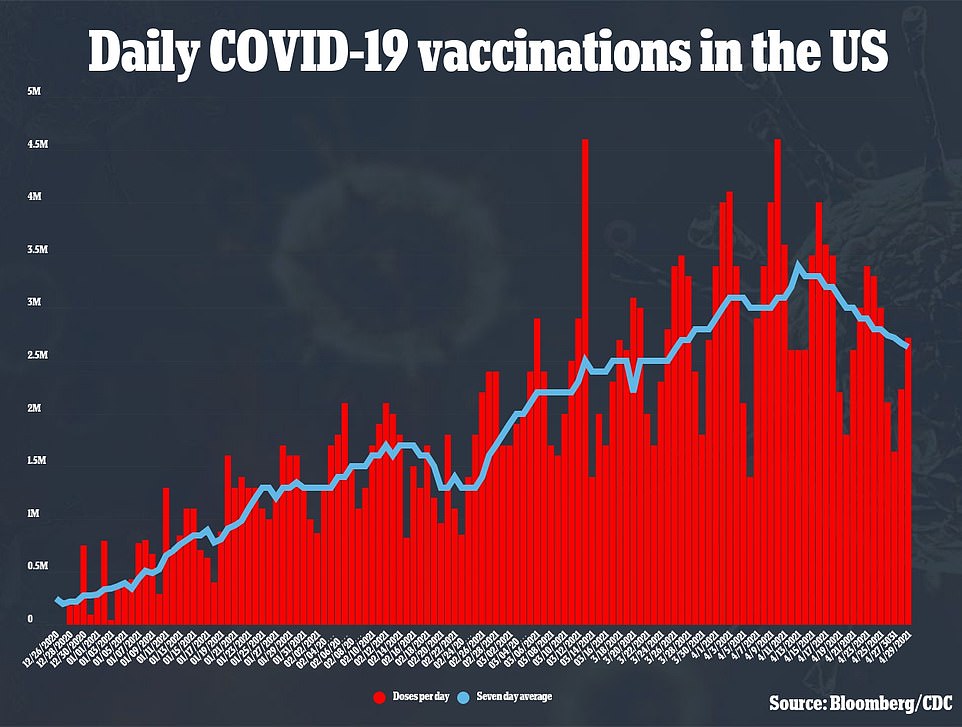 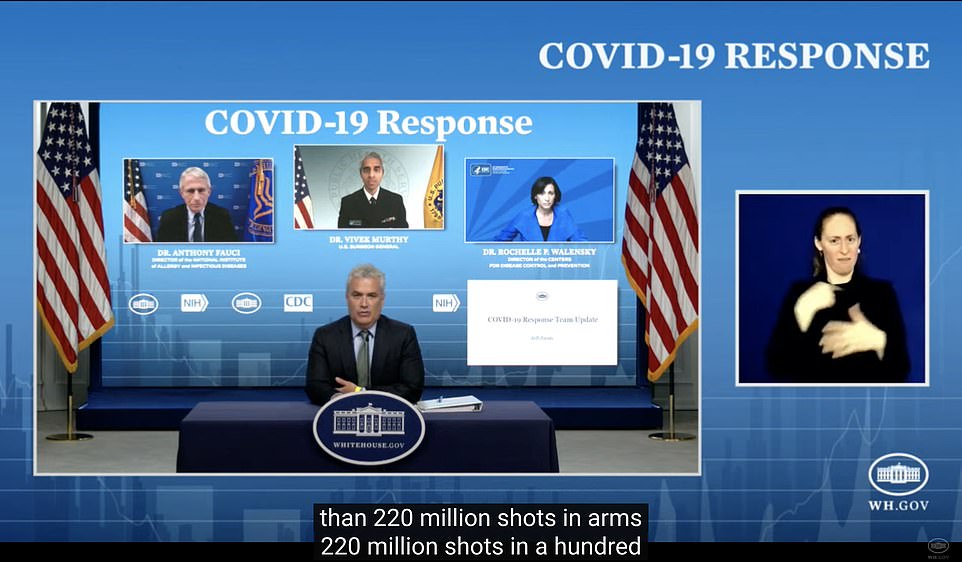 ‘We are treating the battle against the virus like the war that it is,’ said White House Covid response coordinator Jeff Zients (center) during the Friday press briefing

A week ago, the CDC announced that fully vaccinated people can now safely be outdoors without masks, except in crowds.

But Dr Walensky said the agency isn’t yet ready to take the next steps toward getting back to ‘normal.’

‘This virus has tricked us before,’ she cautioned.

‘So I would like to sort of watch and see how it goes before making further estimations of what happens in a couple of months.’

CDC officials have aired on the side of caution, and continue to do so even as the U.S. response gains a more decisive advantage over the virus.

‘If you look, for example at populations that have been highly vaccinated like nursing home residents, you will see that deaths in nursing homes have plummeted, and overall, the death rate has been falling over time,’ Dr Amesh Adalja of the Johns Hopkins Center for Health Security told CNN.

It’s really a function of how many of the high-risk individuals have been vaccinated and that is becoming more evident.’

While most young people have not yet been vaccinated, just about any health care worker who wants the shot and the overwhelming majority of seniors in the U.S. are now inoculated.

More than 68 percent of Americans aged 65 or older are now fully vaccinated and 82 percent have had at least one dose.

High rates of protection among these particularly high-risk groups is helping to drive overall hospitalizations down after a brief uptick earlier this month.

That’s down by nearly 70 percent from more than 5,600 average new daily admissions just a week prior, according to Centers for Disease Control and Prevention (CDC) data. 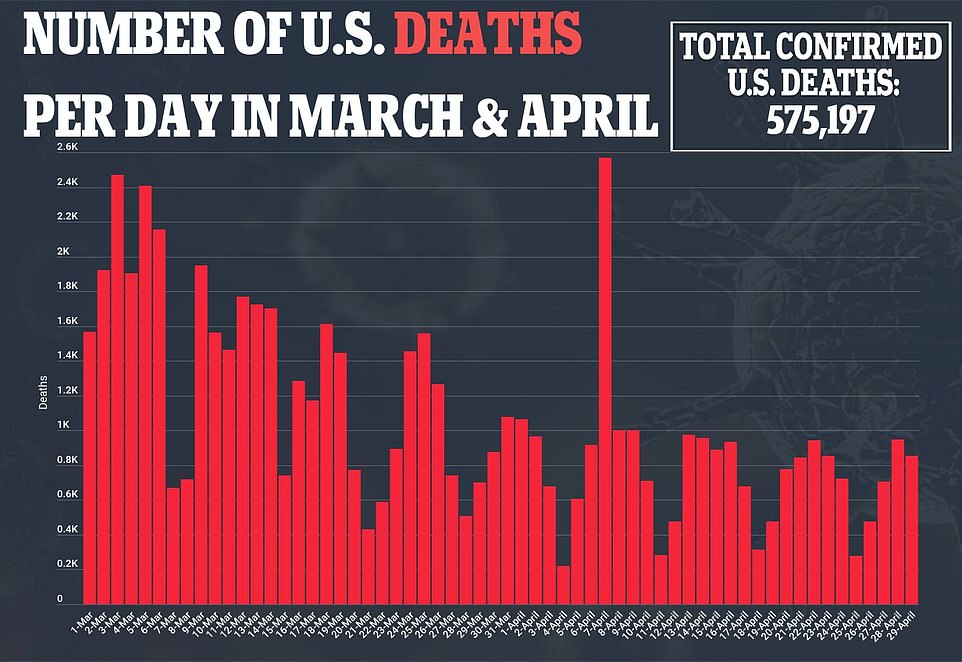 Daily average COVID-19 deaths in the U.S. fell to a low of 628 for this year on Thursday, according to the Centers for Disease Control and Prevention (CDC) 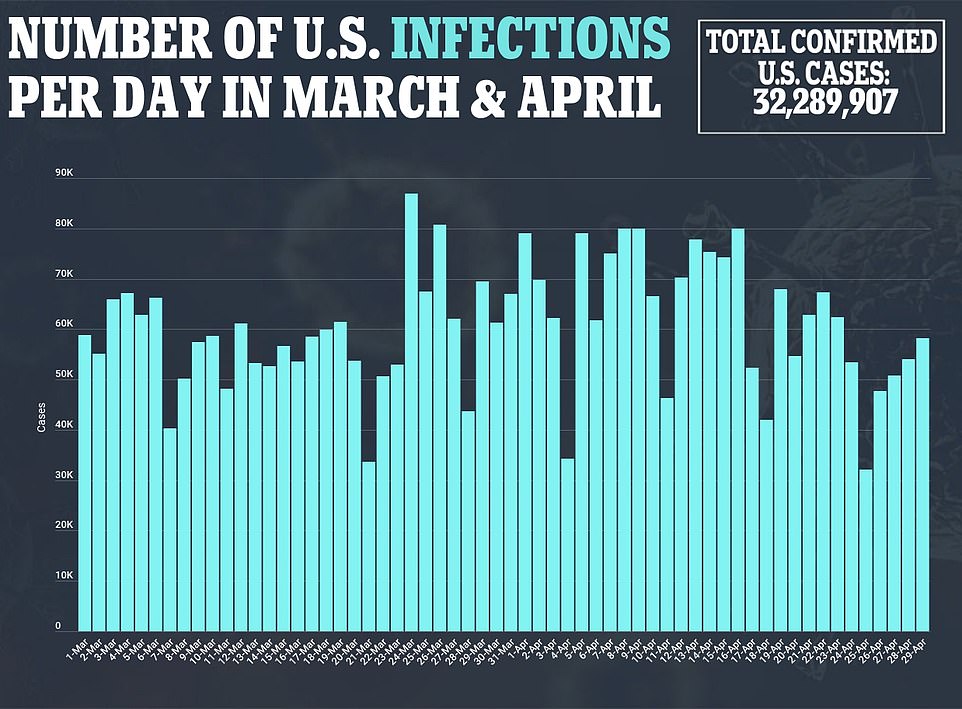 Cases are declining too, with the seven-day rolling average falling to 51,228, the fewest since October 15

While experts increasingly believe that the coronavirus that emerged in China in late 2019 will never fully disappear – from the U.S. or the world – hospitalizations and deaths subsiding are promising signs that COVID-19 won’t again overwhelm health care systems.

White House officials announced on Friday that the U.S. had beaten President Biden’s goal by 20 million, getting 220 million shots in arms by his 100th day in office.

Federal officials have shipped more than 300 million doses of COVID-19 vaccines across the nation so far.

The U.S. expects to have enough doses for every American adult by the end of next month.

With 100 million adults vaccinated, the U.S is quickly approaching a likely turning point in the pandemic: getting 40 percent of people inoculated.

Dr Anthony Fauci is finally giving Americans some good news. America’s top infectious disease doctor predicts a ‘a real change, the start of a precipitous drop’ in new daily COVID-19 infections now that the share of U.S. adults vaccinated against the virus is nearly 40 percent. 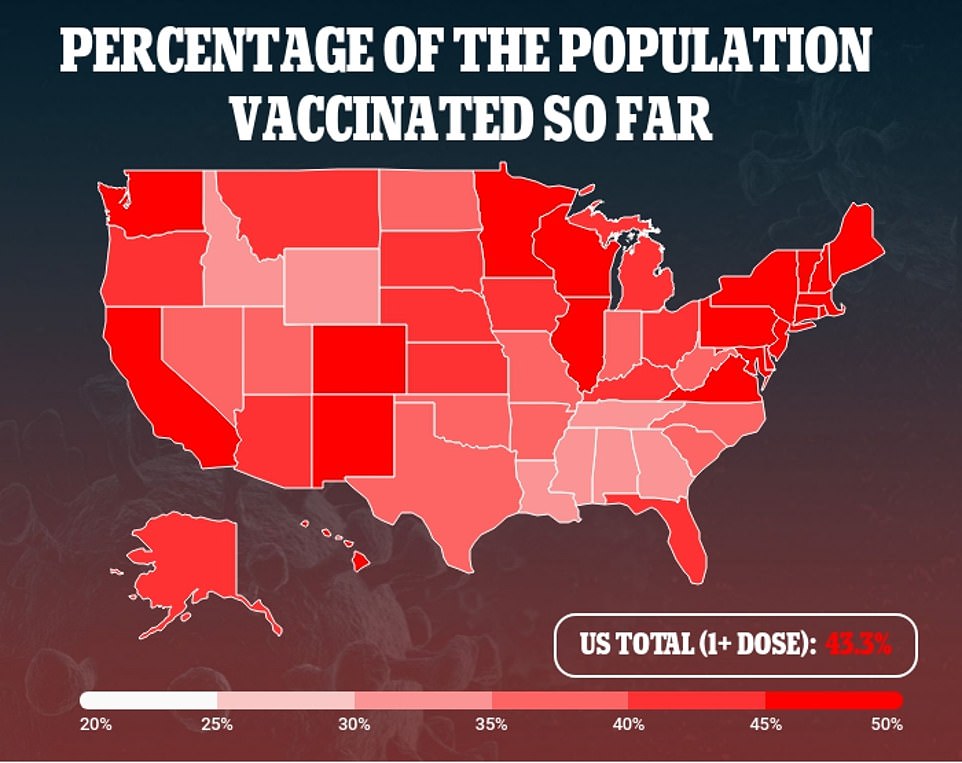 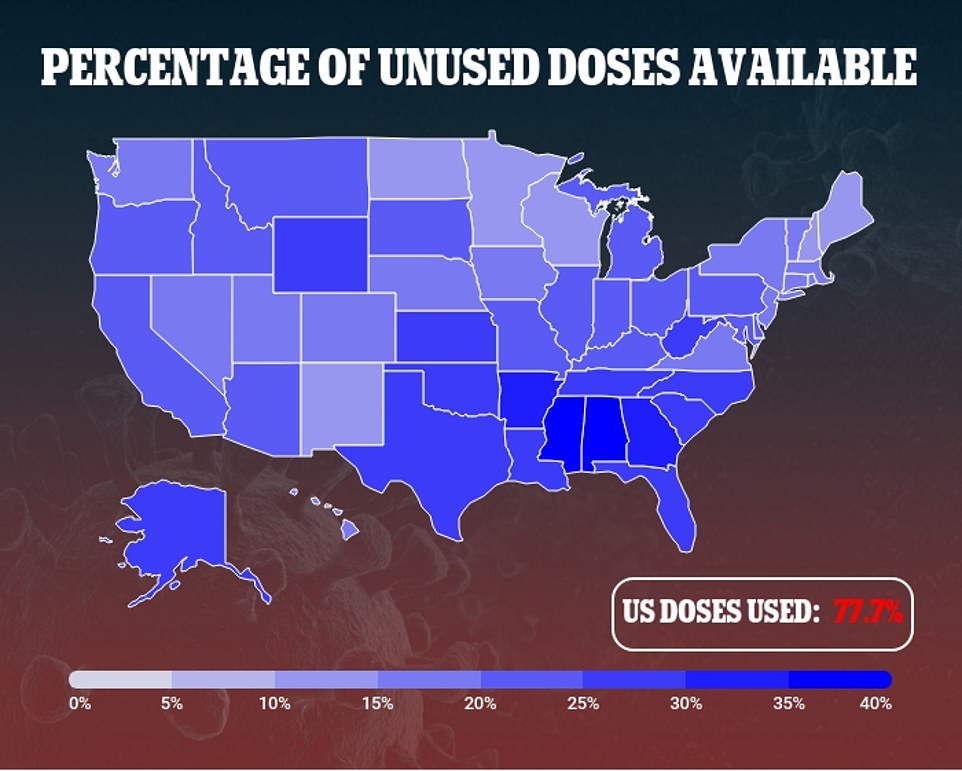 ‘When you do that, that’s when people are going to be able to start doing the things they’ve been craving,’ Dr Fauci told the Wall Street Journal in an interview.

As of Friday, 38.8 percent of Americans have had at least one dose, including 55 percent of adults aged 18 or older.

Data from around the globe shows that once 40 percent of a population is covered by vaccines, daily cases start to decline dramatically, according to a Bloomberg analysis. The pattern has emerged in San Marino, The United Arab Emirates and Israel.

In the U.S. the first signs that vaccinations are turning the tide of cases are becoming apparent. After hovering for weeks around 70,000 cases a day, the U.S. is now seeing 51,000 new infections a day on average – down more than 16 percent from two weeks prior.

However, declining daily shots threaten to reverse that trend, and some states continue to see alarmingly high rates of new Covid infections, hospitalizations and deaths – especially those where a high proportion of cases are caused by more infectious and dangerous variants.