The newly vaccinated are suffering from another pandemic-era malady — they’re sick of working from home.

But with spring weather kicking in, 9-to-5 professionals now have the chance to break free from their cramped apartments and — with the risk of spreading COVID-19 in fresh air “really very low,” according to Dr. Anthony Fauci — work from exterior spaces at a number of local spots.

Apart from outdoor cafes and parks, those itching to break free can now stay productive in public courtyards, private clubs or even at a Brooklyn brewery.

Still, city dwellers who are looking to mix up their daily grind should mind their manners, Andrew Rigie, executive director of the NYC Hospitality Alliance, told The Post.

“Because restaurants are still severely limited with indoor occupancy limitations and may not have that many seats outside, they may hope people don’t sit and linger,” said Rigie, 38.

When in doubt about overstaying your welcome, Rigie added, just ask! There are a slew of other spots for the work-from-home crowd to get their jobs done — and maybe network a little bit, too. Here’s a look at where to lug your laptop.

Reserve a table for the day

Cooped up in her 340-square-foot East Village one-bedroom for months last year while her boyfriend taught on Zoom, Alex Beaton, 32, spent her workdays going stir-crazy.

They called it Work From Kindred — an initiative that returns on May 5 after a winter hiatus. This season, Kindred’s team renovated the back-to-back patios, with outlets at all 19 tables and dividers between them. Available Wednesday through Friday from 10 a.m. to 4 p.m., the $ 25-per-day-per-person fee buys a daylong table reservation and WiFi — plus unlimited coffee, cold brew and tea. (Lunch nibbles, such as a $ 12 barley and lentil salad, are extra. Happy hour is from 4 to 5 p.m.)

Now, “We want it to be accessible to everyone,” said 33-year-old Moshe Schulman, one of Kindred’s managing partners, adding that whenever working guests leave their table, they must wear a mask.

“It definitely has improved my sanity,” said Beaton, who works in marketing for the internet service provider Pilot, of Kindred’s offering. “Just being outside, seeing other humans and being in New York — you kind of feel the life coming back into it, and that lifts my spirits.” 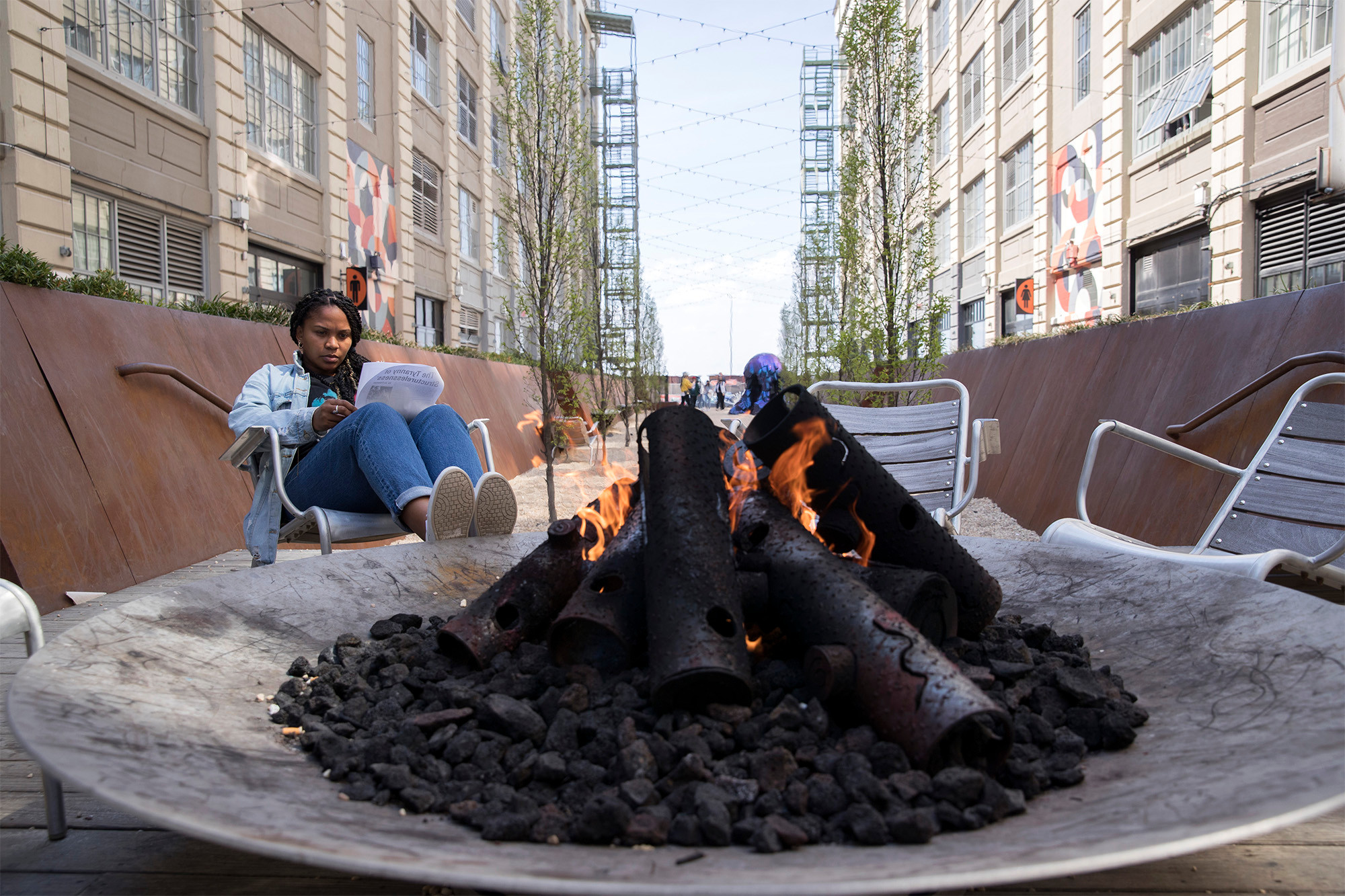 Head to Industry City and cozy up near a fire pit for a day of work before summer kicks off its humid streak. 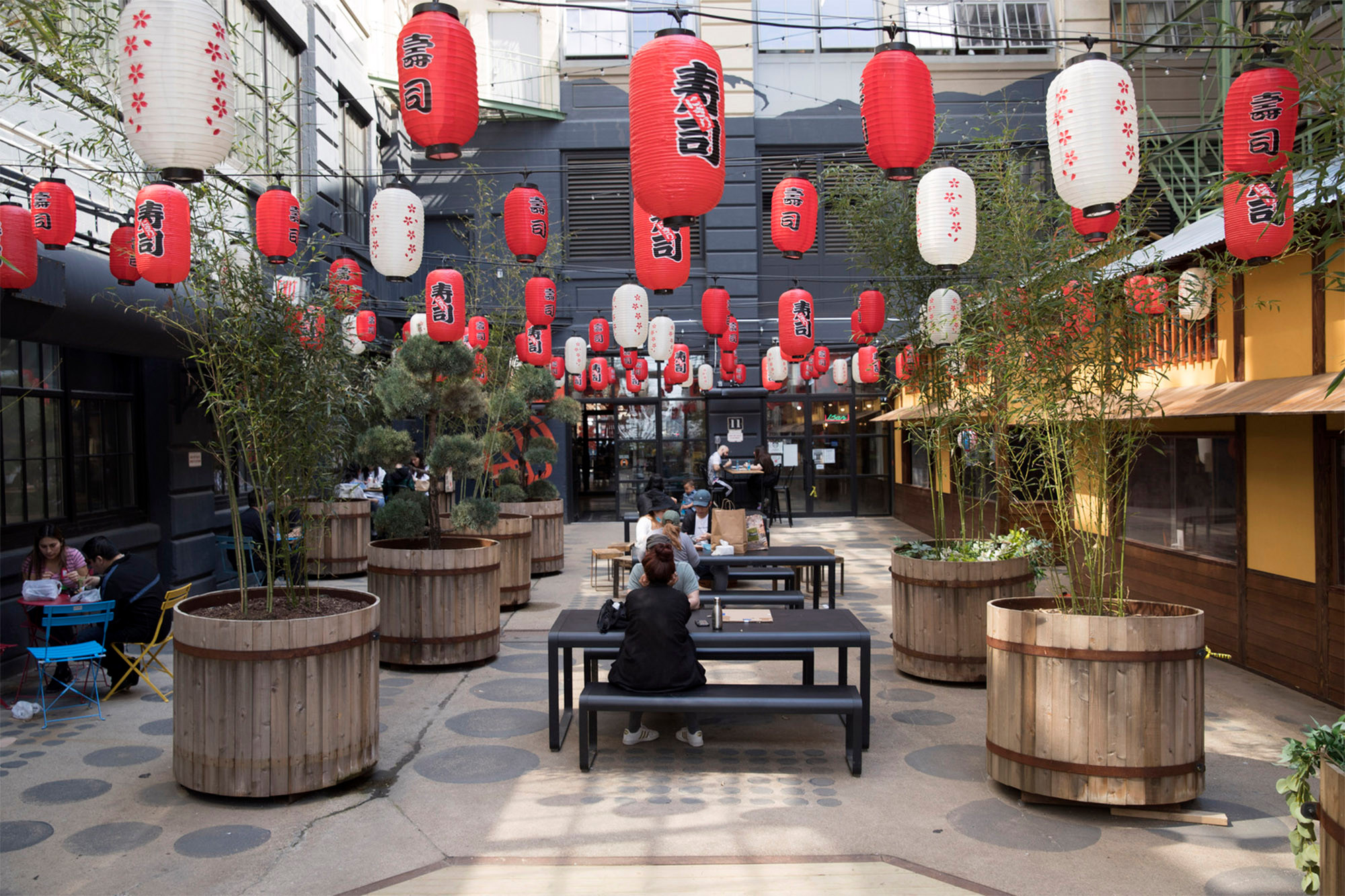 The massive Industry City site has roomy courtyard spaces that lend themselves to spaced-apart seating.

The 16-building Industry City complex in Sunset Park has lent itself well to locals looking to get industrious al fresco. The site has three public courtyards totaling 85,000 square feet, with socially distanced tables, plenty of outlets and strong WiFi from the ground floor.

“Sometimes, I’m taking my laptop out and setting up at one of the tables,” said Dan Dilworth, 37, the director of culinary operations for Union Square Events. “It’s a really nice place to take calls, and there’s enough space that you don’t have to be crammed next to people who are loud and getting in your way. It gives you a little freedom.”

Dilworth, who lives 10 blocks from Industry City, needs to make appearances in his company’s temporary office there — but heads outside two to three days per week for COVID safety.

Visitors can bring their own food and drink to the courtyards, and stay as long as they like — unless it’s an eatery’s designated area. But Dilworth picks up his grub inside Industry City, which has 38 food vendors, including cult-favorite Sahadi’s.

Most times, Dilworth takes his 4-year-old son, Alex, with him.

“I’ll be able to call outside and let him run outside, as well, which is a really nice upside,” he said.

Spring for an exclusive membership

The best things in life are free — but when it comes to a 9,000-square-foot rooftop with shaded seating, it’ll cost you to work there.

Spring Place, a private membership club in Tribeca, opened its WiFi-connected rooftop for the season this month. (Memberships: $ 3,000 per year; $ 2,100 for members under 30.) Following a pandemic-related closure last spring, members — who can bring three friends with them — are glad to have this outdoor space back for their workdays.

“I need the separation between home and work,” said 40-year-old member Jan Roessner, CEO of video game and entertainment company One Earth Rising, who has used the club, which opens at 8 a.m., as his office since 2016. “I get distracted by the laundry or, ‘Oh, I really should do some vacuuming here.’ ”

Roessner prefers spending his business hours outdoors to enjoy the weather. But there’s an added benefit of having other members seated around him for networking.

“I need these human interactions to really thrive,” he said, adding that the club’s vetting process helps create a community of like-minded people. “You’re part of this pack, so you’re immediately connected.”

Members, who get their temperatures checked upon entry, must also wear masks when they step away from their seats.

Roessner says the best perk comes at the end of the day, with eyes looking west to Jersey City, New Jersey.

“The killer is the sunset,” he said. “When the time comes, you sit down, relax, kick up your feet and have a glass of rosé.”

Stick around for a happy hour drink 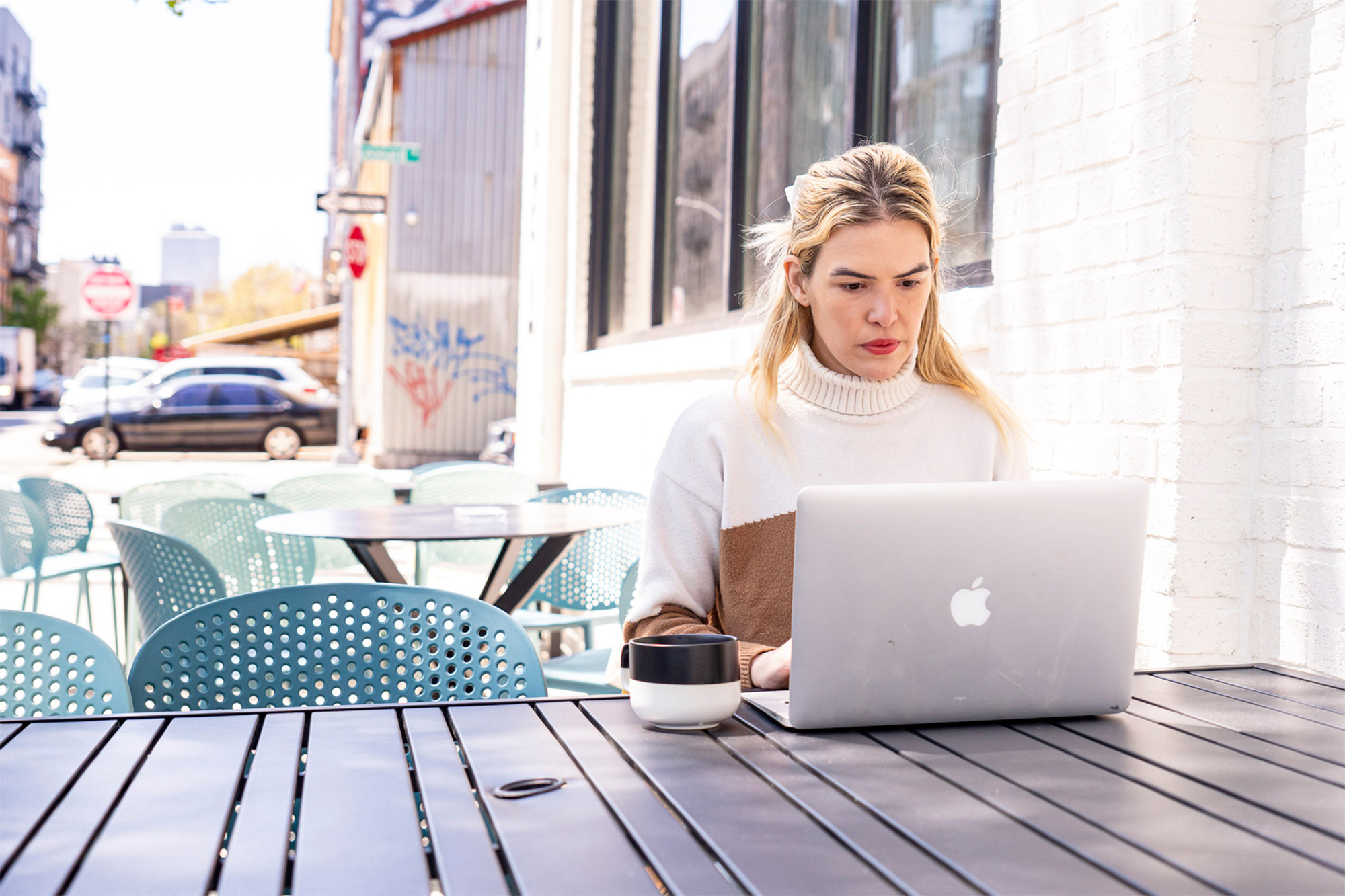 Talea, a Williamsburg brewery and taproom, opens early each morning for the 9-to-5 crowd who can grab a coffee before sitting outside for a day of work. 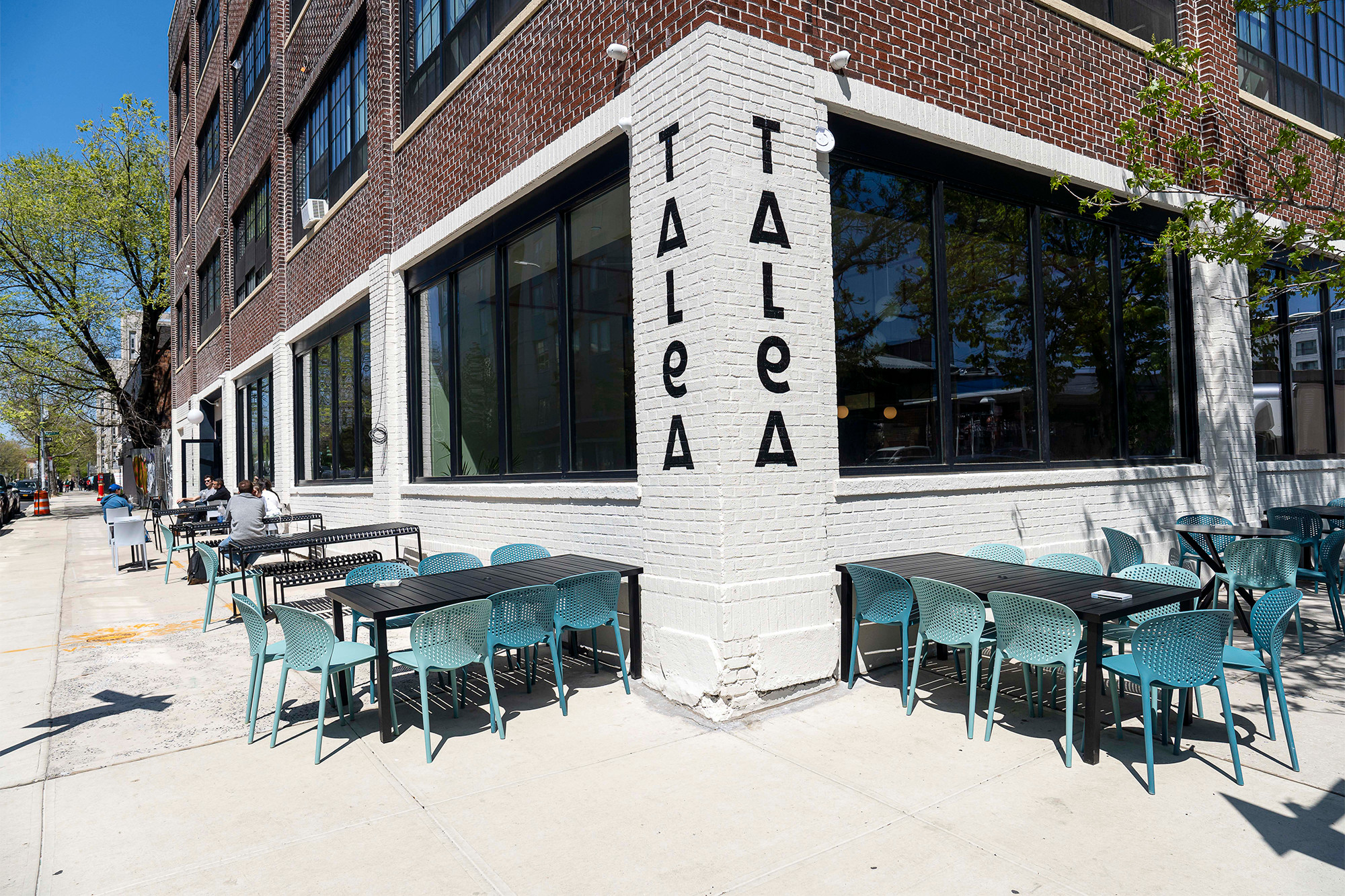 The corner receives good sunlight for those looking to catch rays while staying productive.

Whistle while you work — and maybe even sip on a cold beer.

In March, the 2019-founded beer company Talea opened a 9,000-square-foot brewery and taproom in Williamsburg, with 18 WiFi-connected outdoor tables.

Tara Hankinson, a 34-year-old co-founder and co-CEO, said despite the neighborhood’s access to restaurants, there isn’t a coffee shop nearby.

“That signaled to us that there would be an appetite for a place where people would come and get out of their apartments,” she said.

Talea opens at 8 a.m. each day — and the early-morning work crowd can order coffee (from $ 3.25) or cold brew (from $ 4.25). There are plenty of snacks available, including a $ 5 almond croissant from Bien Cuit (available only on Fridays during the work week) or a $ 15 hummus plate. Hankinson adds that Talea mostly relies on reservations for tables, but weekdays won’t see them start until about 4 p.m. — and those who show up early can stay as long as they wish until then.

“I’ve seen tables strike up conversations during the workday because of the atmosphere being more cafe-like versus a bar environment,” she said.

Take in the view while taking a meeting 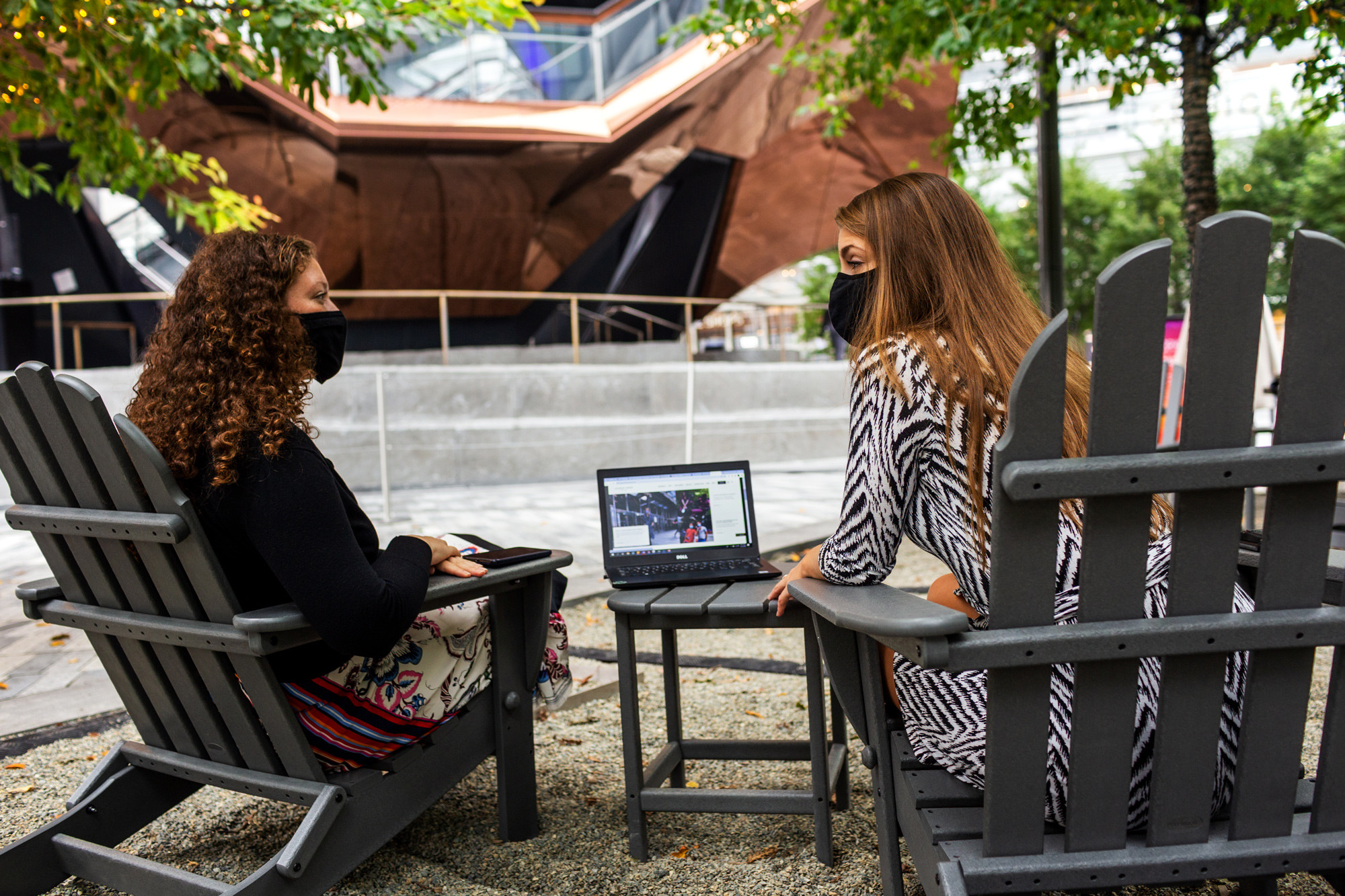 Head to Hudson Yards, where you can work from its “Backyard” in the shade of the towering Vessel installation. 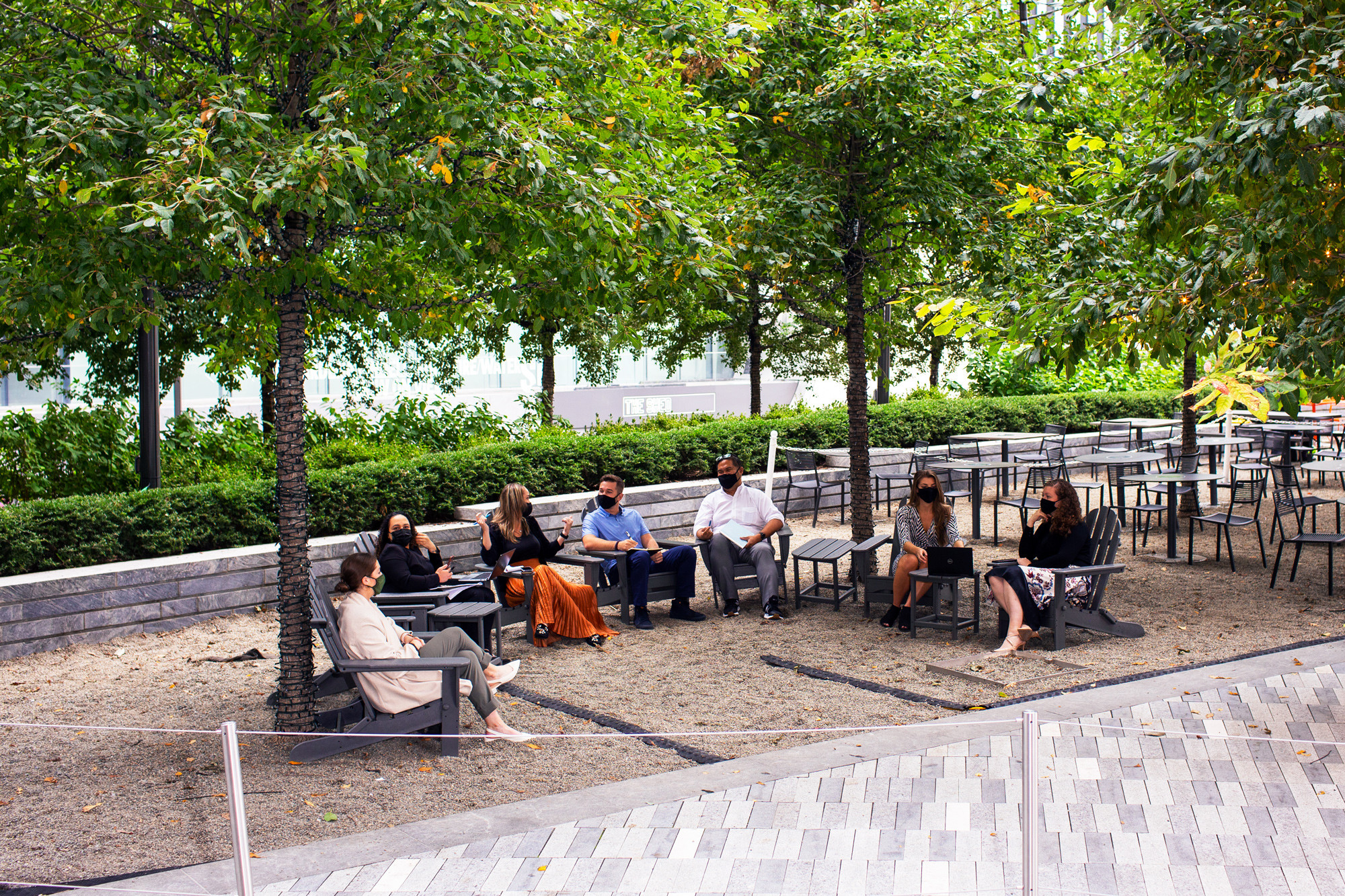 The outdoor space is even good for conducting meetings.

Hudson Yards has become the talk of the town among the work-from-home crowd, which has headed to the Far West Side megadevelopment’s 5-acre “Backyard” — its public square and gardens around the towering Vessel — for an outdoor office space.

“You see people there every day set up with their laptops working, and it’s a great place to take a seat for a little bit if you want,” said Stacey Feder, 46, the chief marketing officer of Hudson Yards.

There are no plugs for charging outside, but this outdoor area gets strong WiFi and tables spaced apart for safety.

Beyond a nice perch, visitors have access to a farmers’ market on Tuesdays and Thursdays — one vendor last week sold lobster rolls — as well as the spots inside the Shops, which include Blue Bottle Coffee and Sweetgreen. To sweat off a tough work day, there’s also a nearby SoulCycle tent offering outdoor classes.

The outdoor perks, said Feder, are “more relevant than ever, so we’re really focused on making it a great amenity to not only people who live and work here, but New Yorkers all around.”