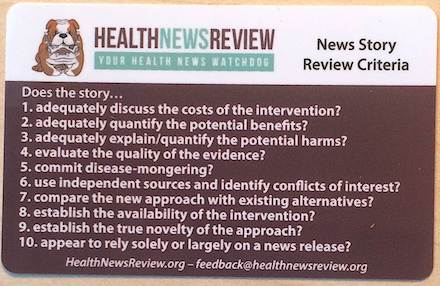 Part of our website is going away April 1. But major features of the site will remain.  Here’s the breakdown and some background.

When I started publishing HealthNewsReview.org 15 years ago, the only content was news story reviews. To be more specific, we only reviewed news stories that included claims about health care interventions (treatments, tests, products, procedures, etc.). Because we applied 10 standardized criteria to the review of these stories, almost always with three independent reviewers (representing a mix of journalists, physicians, and others trained in the evaluation of evidence), the approach quickly gained credibility and a devoted following. Rather than delivering a subjective thumbs up or down, our reviews were the purest, most objective, systematic, analytical way we knew of for evaluating claims about health care that informed many Americans.

By the time substantial funding for the project elapsed at the end of 2018, my team, which had grown to about 50 reviewers, had systematically reviewed 2,616 news stories.

You can read more about the final report card on these 3,222 reviews.

Through the years we added other content types that became very popular with thousands of followers:

Why we need to remove the reviews

Now, because of the age of some of the original coding and structure of the website going back 16 years – counting our year of beta development – the systematic reviews cannot be maintained any longer. The website now runs on a WordPress platform which must be updated occasionally.  But when my webmaster recently tried to update WordPress, all of the systematic reviews disappear.  If we don’t update WordPress the website will eventually be unstable. So I really have no choice but to remove the 3,222 news story and news release reviews as soon as possible.

As a result, I have chosen April 1, 2021 as the day these reviews will be removed from the site. I would do it sooner but I want to give followers a chance to peruse the reviews and learn from them.

After April 1, you will still be able to see our blog – the most popular feature of the site – the tips, primers and case studies, and the stories of patient harm from misleading media messages.

I am sad to have no other choice but to remove the reviews.  From the time I first saw the Media Doctor Australia project pursue this pathway in 2004, I was impressed.  Then when Floyd (Jack) Fowler, Jr., PhD and the Foundation for Informed Medical Decision Making got me started with funding – support that continued from them for 8 years – our project soon became the biggest with the furthest reach of any of the six similar projects that sprung up around the globe. Later, Arnold Foundation funding allowed us to reach new heights for four years of much greater impact.

The reviews were our bread-and-butter

No other project in the U.S. has attempted anything similar to what we did with those criteria-driven reviews. Others have made claims about fact-checking projects.  I have written about the difference between fact-checking and what we did, and pointed out the inherent potential flaws of fact-checking on health care media messages.

A bioethicist wrote to me recently: “What you have done is remarkable. The information is so important – and not just for journalists.”

The first part of that comment is very kind.  The second part is right on the money; I always viewed this project as being useful for the general public.  As it says in our masthead, “Improving Your Critical Thinking About Health Care.”  The criteria-driven reviews were a major factor in delivering that kind of help to citizens/patients.

I’m not sure how often I will add new material to the website in 2021. The years 2020 and 2021 so far have sucked the wind from my sails. The pandemic, vaccine/treatment hype, confusing and contradictory statements from federal health agency leaders (Azar and Atlas lead the list), the ugliest politics, unequal justice, violence, the attack on the U.S. Capitol and the refusal by many elected officials to do anything about it – it all adds up to the worst year of misinformation of the American public that this journalist has seen in a 48-year career.

I’ll publish when I think I can add something that isn’t being adequately addressed.