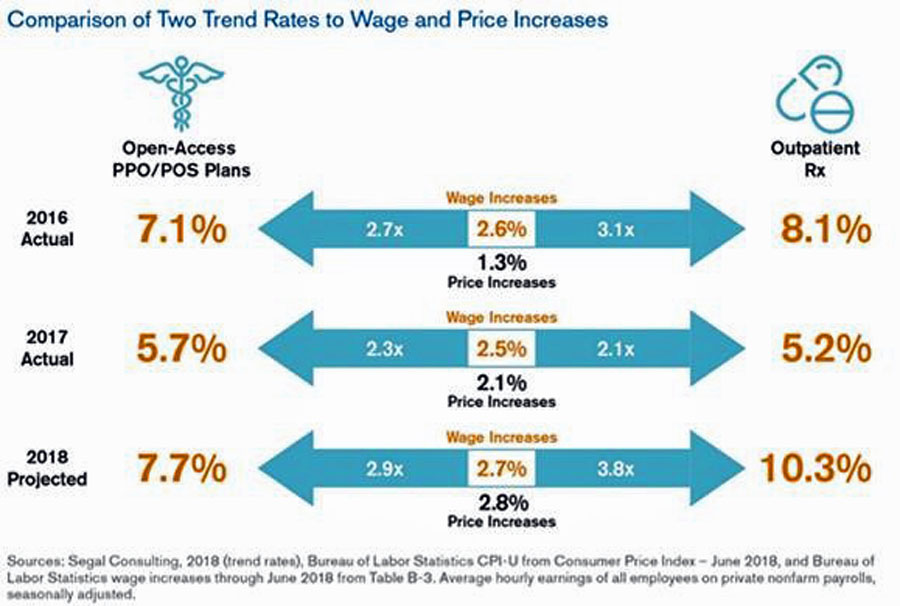 The prices of medicines prescribed in outpatient settings rose, on average, 10.3% in 2018. Wages increased about 2.6%, and consumer prices, 1.3%, based on the 2019 Segal Health Plan Cost Trend Survey. 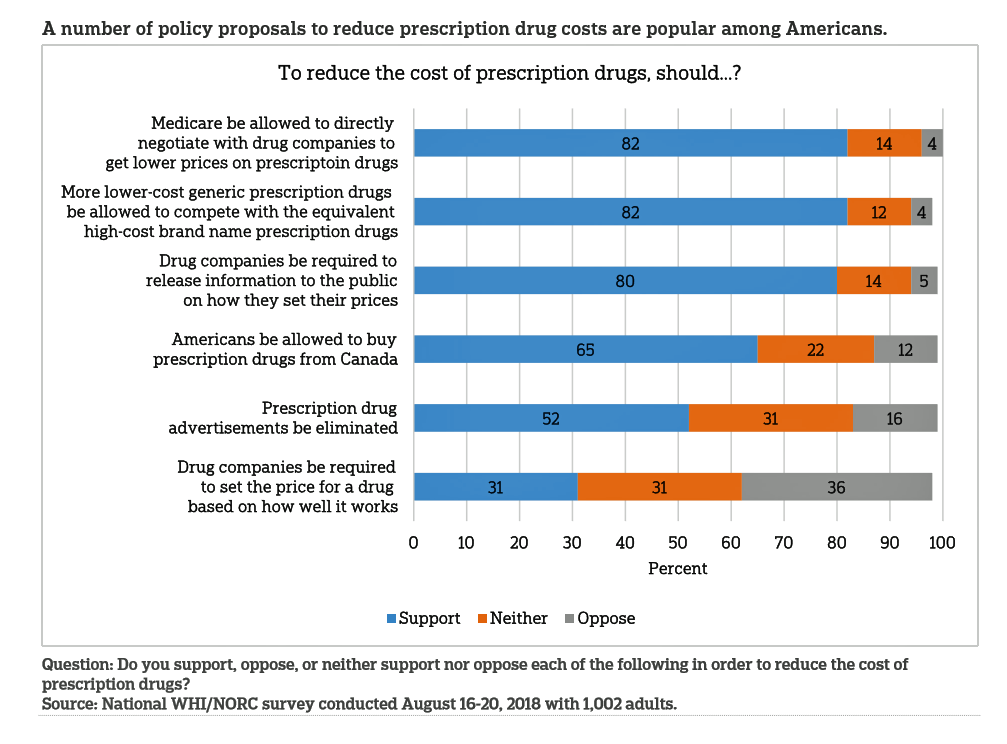 Segal forecasts that medical cost trends will moderate for 2019, lower than 2018 rates.

But to the patient, now feeling like a consumer dealing with high-deductibles and the growing sticker shock of specialty drug prices, a so-called “moderate” trend still feels like a big bite in the household budget. Specifically, specialty drug trend is expected to be 14.3% in 2019, compared with 17.7% in 2018 — still several times greater than wage growth expectations.

Over the ten years between 2006 and 2016, deductibles increased an average of 176% and coinsurance, 67%. Wage growth over that decade was relatively flat, as workers covered by insurance through employers traded off health benefits for wage increases.

Now consider a poll released this week by the West Health Institute and NORC at the University of Chicago on What Should Be Done About the High Cost of Prescription Drugs?

Two-thirds of Americans are very concerned about the high cost of prescription drugs, and 88% of people say medication costs should be a priority issue for Congressional candidates in the the November 2018 midterm elections.

The vast majority of U.S. health consumers believe that Medicare should be allowed to negotiate with drug companies to fetch lower prices for prescription drugs, and that more drugs should switch to generic when possible. Eight in ten people say drug companies should reveal how they set prices in a very transparent process.

Interestingly, one-third of patients believe drug companies should be required to set the price of a drug based on its effectiveness.

Health politics are top-of-mind for most Americans, who don’t approve of how either President Trump or Congress are dealing with the high cost of Rx drugs in the U.S., the poll discovered.

While this varies by political party affiliation, about 8 in 10 Americans across-the-party-landscape say health care costs are a very important issue — on par with jobs and the economy, but more than national security, immigration, or trade issues.

“Never mind the rhetoric. Most Americans think Trump is choking on drug prices,” Ed Silverman, pharma industry analyst, wrote in STAT in his analysis of the West Health/NORC poll.

Remember that President Trump promised American voters in his TIME magazine Person of the Year interview in December 2016 that he would drive down Rx costs for consumers — because, as he has often said, “Drug companies are getting away with murder” in terms of pricing.  [Here’s my take on that TIME interview in the Health Populi blog.

A sobering and clinically important impact of high drug prices is self-rationing: the West Health/NORC survey found that one-third of Americans who take prescription drugs regularly had not filled a prescription or had reduced their therapeutic recommended dose due to drug prices.

Research from the IQVIA Institute for Human Data Science, published in August, calculated that when cost sharing rises, patients were more likely to abandon their medicines. In 2017, 69% of commercially insured patients did not fill a new Rx if there was a $ 250 out-of-pocket cost. The bottom line for health consumers: prescription abandonment rises as patient out-of-pocket costs at the pharmacy increase. This short-term fiscal choice by the health consumer can lead to longer-term poor physical outcomes for the person-as-patient. 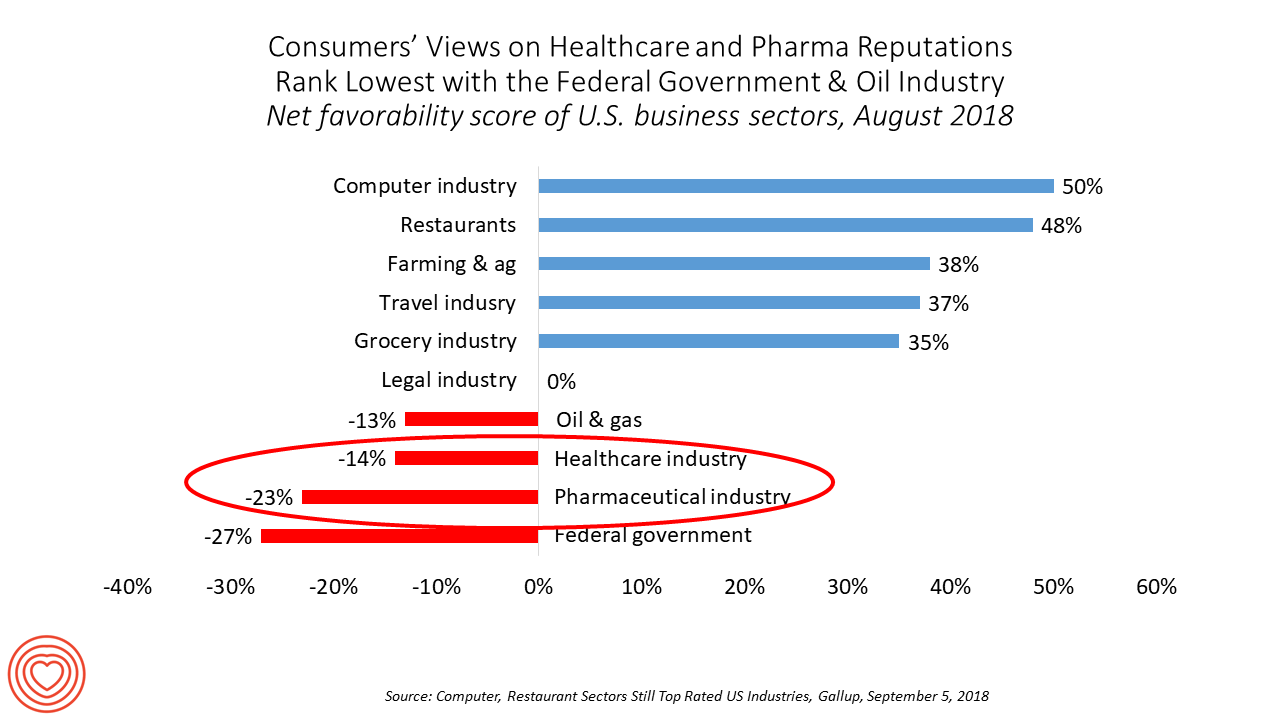 Health Populi’s Hot Points:  And now, to reputation risk. For several years, U.S. consumers have long-ranked the pharmaceutical industry relatively low, just above car salespeople and the Federal government. In Gallup’s latest poll on Americans’ industry rankings, both healthcare and pharma fell to the lowest net favorability score with the Federal government at rock bottom.

While this survey found the healthcare industry falling in reputation, consumers will come to appreciate a group of hospitals coming together to deal with the high price of medications: Civica Rx is a new effort, launched earlier this month, bringing together hospitals and foundations establishing a not-for-profit generic drug company.

As the NORC/West Health poll found, generics are a beloved healthcare stakeholder to consumers.

Civica Rx will begin the company with a portfolio 14 hospital-administered generic drugs, some of which are in short supply. Thus far, about 500 U.S. hospitals have joined in this effort: they include some very large players, such as Catholic Health Initiatives, HCA, Intermountain Healthcare, Mayo Clinic, among others. The Veterans Administration with also work with the group in ways to-be-announced. Civica Rx will begin to apply to the FDA in early 2019 to make and sell the generic drugs.

“We all pay a price, and lower-income patients shoulder a particularly heavy burden. This intolerable situation has escalated to a public health crisis. It’s time to put patients before profits and begin the transformation of healthcare that Americans deserve,” Shelley Lyford, President and CEO of the Gary and Mary West Foundation, is quoted about Civica Rx in Inside Philanthropy.

Another party-to-the-rescue could be Amazon. This week, Amazon announced that it could be opening 3,000 cashier-less brick-and-mortar stores, which might be used to distribute prescription drugs if that is in the ecommerce/retailer’s plans. Note that a Deutsche Bank analyst cited a consumer survey where most Prime members said they’d be open to buying drugs from Amazon. A similar study from LendEDU found the same in August. Americans love their pharmacies and pharmacists, I noted last week in the context of the latest J.D. Power pharmacy satisfaction study.

Given both consumer and industry dynamics — with the Department of Justice approving the Cigna + Express Scripts merger — the nature of pharmacy and prescription drug channeling may come to change quite quickly.