Gary Schwitzer is the founder and publisher of HealthNewsReview.org. He tweets as @garyschwitzer.  He usually avoids using the term “fake news” because shoddy, incomplete health care news is a much bigger problem.  But this is one example where the fake term applies. 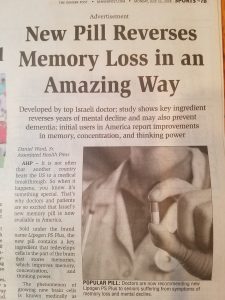 The story began:  “It is not often that another country beats the US to a medical breakthrough.  So when it happens, you know it’s something special.”

But buyer beware.  Because it’s not so special when the story is bylined from “The Associated Health Press.”

That’s not the venerable Associated Press wire service.  It’s a copycat advertising service made to look just like one of the best health news services in the world.

And major newspapers across the country are running these ads and allowing them to be dropped into the newspaper right alongside real health care journalism.

I’ve written in The BMJ about how I don’t care for the “fake news” label and don’t believe it applies to most of what we review on HealthNewsReview.org.  But this trend is clearly fake news and newspapers should stop it and stop making money off of it.

In the example below, the Memphis Commercial-Appeal newspaper placed the fake news ad right alongside a real Associated Press story reported by a veteran journalist.  Talk about crossing the line between editorial and advertising! 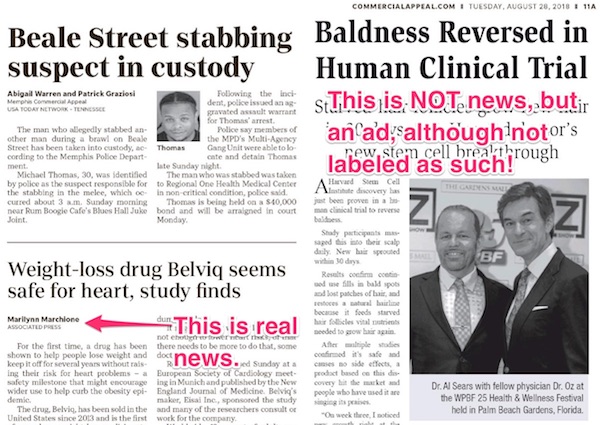 In other examples, at least the word Advertisement appears, albeit in font size much smaller than the headline.  Even when the copycat “Associated Health Press” byline appears, it is not always spelled correctly.

The Colorado Times Recorder reported on this trend under the headline: PILLS MAY REPLACE DIAPERS AND PADDED UNDERWEAR: Ads Disguised As News Illuminate Plight Of The Denver Post. The reporter pointed to 10 examples in the Denver Post in a five month period, and one found in the St. Louis Post Dispatch newspaper. About the Denver Post, he wrote:

Ironically, the newspaper’s precarious financial condition is undoubtedly the major reason its accepting fake news advertisements that brazenly aim to manipulate the loyal audience that continues to love and cherish the newspaper: old people.

Since March, I’ve tracked some of the fake-news ads that run in the Post’s print edition. To me, they’re shocking, funny, and heart-breaking, especially because I’ve seen them work on my very own mom. …

To its credit, The Post labels the ads as advertisements, but the warning is too small and does not get the newspaper off the hook for promoting the same fake news it purports to hate.

The ads undermine The Denver Post’s most valuable asset, which is its credibility as a trusted news source.

A blogger wrote about the practice as seen in the Philadelphia Inquirer, “A curious report: When a story may be less than meets the eye.”

As you might expect, the ads don’t just appear in major market newspapers. Other such ads have appeared in smaller market newspapers such as the Hagerstown (MD) Herald-Mail, the Minnetonka (MN) Daily American, and the Tillsonburg (Ontario) News.

“No money, no mission,” some say.  But if a newspaper’s new mission includes raising money in ways that threaten the integrity and credibility of the news, that’s not a mission worth pursuing.

Why, of all times, would you give a sword to those who falsely charge journalists with promoting fake news?