Millions of at-risk patients have yet to get their flu jab this winter ‘because of delivery problems to GP practices’, which has led to pharmacies and doctor clinics being asked to share stocks

Millions of at-risk patients have yet to get their flu jab this winter because of delivery problems to GP practices.

Just 33.8 per cent of over-65s have been vaccinated, compared to 53.7 per cent this time last year, according to a Public Heath England national flu report.

This is despite influenza putting elderly people – who get a free jab on the NHS – at risk of life-threatening complications, such as pneumonia.

The British Medical Association said the drop in vaccine uptake is ‘no surprise’ given the delivery problems to GP practices. 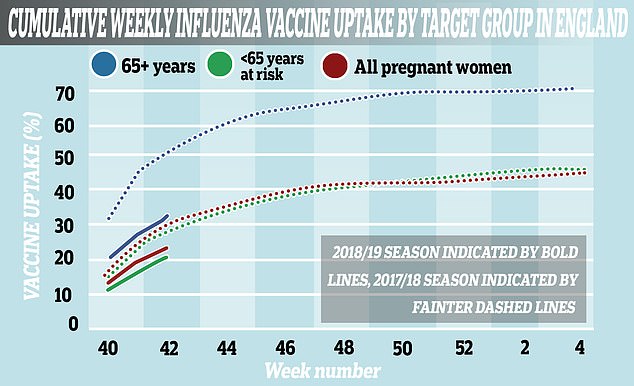 Graph shows the weekly flu vaccine uptake among those over 65, at-risk under 65s and pregnant women so far this season compared to last year. Jab uptake among the over 65s is at just 33.8 per cent compared to 53.7 per cent between October 1 and 21 in 2017

Ahead of this winter’s flu outbreak, officials recommended over-65s are given a new trivalent vaccine, which protects against two A strains and one B strain.

The aTIV injection, branded as Fluad, has been used by other European countries for the last 20 years. It costs £9.79 – more than the £8 quadrivalent jab.

It is unsure why the roll-out of the jab, developed by Seqirus, is being phased, however, the firm is believed to be struggling to met the UK’s unprecedented demand.

Around 20 million at-risk people in England, including the elderly and the pregnant, receive a free flu jab on the NHS.

At-risk people include those with conditions such as asthma, heart failure, chronic kidney disease and diabetes. 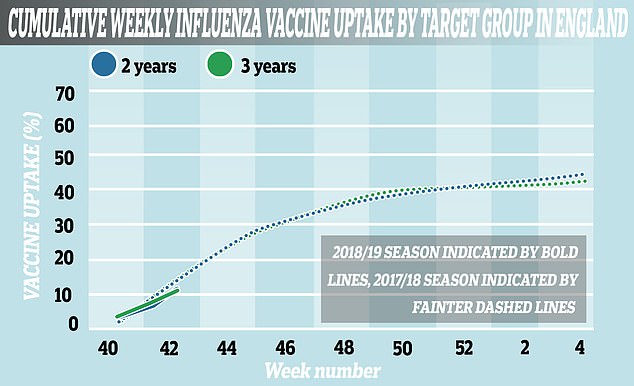 Slightly fewer toddlers have been vaccinated against flu so far this season compared to last year. Rates among two-year-olds fell from 13.3 per cent in 2017/18 to 10.1 per cent in 2018/19. Among three-year-olds vaccination rates are down from 13.7 per cent to 10.7 per cent

‘This year the phased delivery of vaccine will mean it’s only in November that we can ensure that all eligible patients have been given an opportunity to be vaccinated.’

WHERE CAN YOU GET A FLU JAB?

Flu can be a serious illness. If you become very ill with it, it can cause complications such as pneumonia, kidney failure and inflammation of the heart, brain or muscle.

People at most risk of serious illness or death if they get flu are offered the vaccine on the NHS. Ideally you should have this before the end of December, when flu peaks (it takes around two weeks after the jab for antibodies to develop completely).

At-risk groups include anyone aged 65 and over, people living in long-stay residential care homes, carers and pregnant women.

The vaccine is also offered to anyone aged six months to 65 years with certain conditions, such as diabetes.

It is available via your GP’s surgery.

All children aged two to eight (on August 31, 2017) are also offered the vaccine as a nasal spray. The UK introduced the child vaccination programme in 2013. Last year, the vaccine had 66 per cent effectiveness. Australia does not have a similar programme.

If you do not qualify to have the jab on the NHS, you can pay to get it at a pharmacy.

Older children who fall outside the NHS scheme can get the nasal spray vaccine from some pharmacies such as Well (£23 for those aged between two and 18; this may involve a second dose at least four weeks later for another £23) and the injection for those 12 and over for £9.

PHE recommended doctors dish out the quadrivalent QIV vaccine, which protects against four strains of flu, to at-risk adults between 16 and 64.

This delayed deliveries to around 1,000 GP clinics by two weeks.

PHE claimed it is ‘monitoring the situation carefully’ and expects vaccination rates to improve in the next few weeks when more jabs are due to be delivered.

In the meantime, GPs should inform patients vaccines will be available in the next few weeks, the body’s head of immunisation, Dr Mary Ramsay, said.

Between October 1 and 21, just 22.2 per cent of at-risk under 65s were vaccinated against flu compared to last year’s 29.1 per cent, PHE figures showed.

Expectant mothers are also failing to get the jab, with just 24.8 per cent being vaccinated over the three weeks of October compared to 30.5 per cent last year.

Pregnancy weakens a woman’s immune system, which raises her risk of flu complications.

These complications can include bronchitis that develops into pneumonia, middle ear infections, and even sepsis, meningitis and brain inflammation.

Flu is a very common infection in babies and children, which can lead to dangerous complications.

Some may need hospital treatment and very occasionally youngsters even die from the infection. The children’s flu vaccine is given as a nasal spray.

Dr Ramsay said: ‘We are monitoring the situation carefully, but expect the coverage to catch up over the next few weeks, as more stock is delivered.

‘Practices and pharmacies without stock should make sure patients are aware that vaccine will be coming available over the next few weeks and book them in for a future clinic.

‘It is important that those eligible are protected before flu starts to circulate, usually in late December.’

An NHS England spokesperson said: ‘This year people over 65 will be offered the best vaccine available anywhere in the world.

‘As was announced to GPs and pharmacists some months ago, delivery of the jab is being phased and everyone who needs the vaccine will get protected before December, when the flu season usually hits.

‘Seqirus has confirmed all orders for the over 65 population will be delivered by mid-November.’

Seqirus, which is the only flu vaccine manufacturer globally to produce a jab with a specific immune-boosting adjuvant, is believed to have been asked by health authorities in late January to make around nine million doses.

The firm agreed to extend its manufacturing campaign in order to supply enough jabs and reached an agreement with authorities to roll the vaccines out over several months.

A Seqirus spokesperon told MailOnline: ‘We expect to deliver more than 9.7 million doses of [the flu vaccine] FLUAD to GP practices and pharmacies across the UK this season, taking total supply to well above the uptake seen in the 65+ age group in previous seasons.

‘We are on track with the phased delivery plan agreed with the UK health authorities earlier this year, with almost six million doses supplied to providers to date and our remaining deliveries to be completed by mid-November as planned.’

The rocketing number of flu cases in the UK and across the world was put down to a surge in four aggressive subtypes that attacked the population simultaneously.

One included the so-called ‘Aussie flu’, a strain of influenza A which triggered triple the number of expected cases in Australia during the country’s winter.

Experts feared the virulent H3N2 strain, which reached the UK, could prove as deadly to humanity as the Hong Kong flu in 1968, which killed one million people.

Another was a strain of influenza B, called Yamagata and dubbed ‘Japanese flu’, which was blamed for the majority of cases during the UK’s winter.

Its rapid spread raised concerns because it was not covered in a vaccine given to the elderly. However, experts claim it was less severe.

Usually, just one subtype, of either influenza A or B, is responsible for the majority of cases. The bug spreads easily in the cold weather.