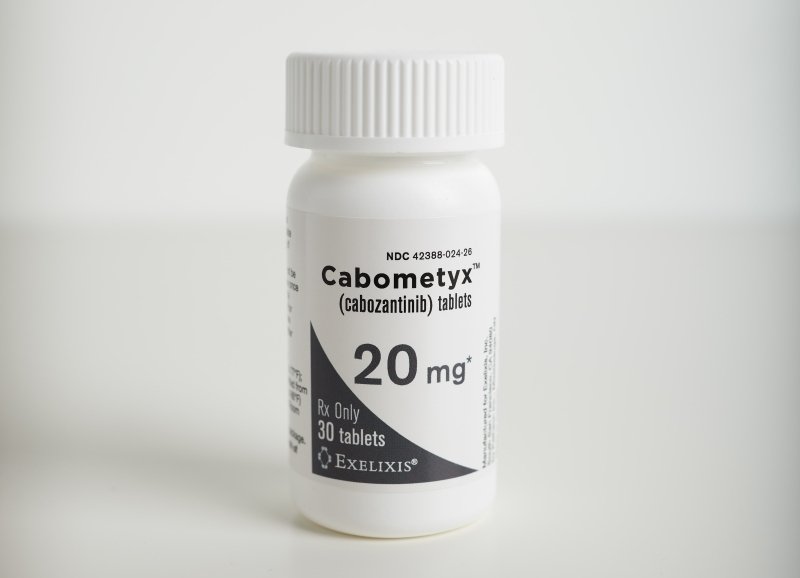 When Ipsen announced last week that it wanted in on Exelixis’ Cabometyx for thyroid cancer, the company pegged that move to the oncology drug’s promising late-stage trial results. Now, Exelixis is offering up more details of that very trial.

For a phase 3 study up for presentation at the virtual American Society of Clinical Oncology meeting, investigators enrolled approximately 300 differentiated thyroid cancer patients who were resistant to radioiodine treatment and previously treated with VEGFR-targeting drugs such as Bayer’s Nexavar or Eisai’s Lenvima.

Now, investigators are reporting that placebo patients went a median 1.9 months without their cancer worsening, while the median hadn’t yet been reached in the Cabometyx arm.

Yet on a more sour note, the overall response rate in the trial came in at 15% among the first 100 randomized patients after six months, falling short of the trial’s co-primary endpoint.

RELATED: ASCO GU: With 2-year data, the jury’s still out on the kidney cancer race between Opdivo-Cabometyx and Keytruda-Inlyta

Patients on Cabometyx reported far higher rates of adverse events compared with placebo, including diarrhea (51% vs 3%), hand-foot skin reaction (46% vs 0%), hypertension (28% vs 5%), fatigue (27% vs 8%) and nausea (24% vs 2%). While just over half of those on Cabometyx reported serious reactions, only 5% had to quit the study because of them, according to the readout.

Exelixis plans to release more details of its phase 3 findings during a session at the ASCO Annual Meeting on June 7.

Based on last year’s interim results, the independent safety monitoring board suggested the trial stop enrolling patients and participants be unblinded. The FDA later awarded the drug breakthrough therapy status, which is given to new medicines when they show substantial improvement over currently available treatments on at least one clinically significant endpoint.

In Ipsen’s case, it already had an exclusive partnership with Exelixis to commercialize Cabometyx—authorized in over 50 countries for the treatment of kidney cancer—outside the U.S. and Japan. But now that Ipsen has exercised its option to collaborate with Exelixis on Cabometyx’s pivotal phase 3 clinical trial, the company will have access to its full set of results to help with future regulatory submissions.

Roughly 44,000 new cases of thyroid cancer will be diagnosed in the U.S. this year, Exelixis says. Differentiated thyroid tumors make up most of all thyroid cancers and are usually treated with surgery, followed by treatment with radioiodine.

But roughly 5% to 15% of those tumors are resistant to the treatment, leaving patients with few options to improve life expectancy, Exelixis says.

Exelixis’ medical chief Gisela Schwab, M.D., maintained on a call with analysts in early May that the California-based biotech would forge ahead with a new drug application for Cabometyx by the end of June. Cabometyx already scored one FDA nod early this year as a combo treatment for renal cell carcinoma.