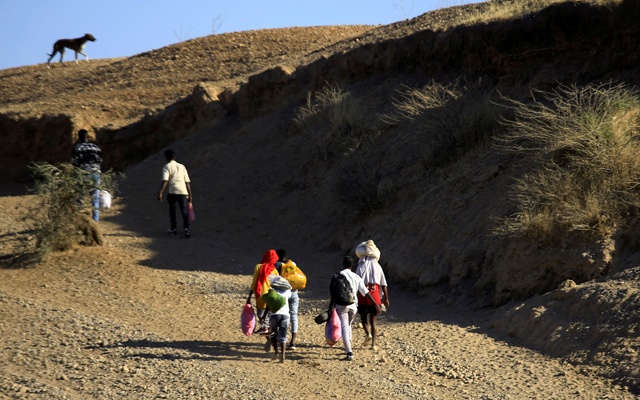 The UN official, Mark Lowcock, said the humanitarian crisis in Tigray had deteriorated over the past month with challenges to aid access and people dying of hunger. He said the world body had not seen any proof that soldiers from neighboring Eritrea – accused of massacres and killings in Tigray – have withdrawn.

“To be very clear: the conflict is not over and things are not improving,” Lowcock said, according to his notes for the private briefing, which was requested by the United States.

US Ambassador to the United Nations Linda Thomas-Greenfield noted Thursday’s briefing was the fifth private council meeting since fighting between Ethiopia’s federal government troops and Tigray’s former ruling party began in November, according to diplomats familiar with her remarks.

“The Security Council has been unified on Syria, Yemen and even on Burma, where we were able to come together to release a statement,” she said, according to the diplomats. “We are asking the council to reconsider a statement on Ethiopia. … Victims need to know the Security Council cares about this conflict.”

The council has so far been unable to agree on a public statement on Tigray, with Western countries pitted against Russia and China, which diplomats say question whether the body – charged with maintaining international peace and security – should be involved in the crisis.

The conflict has killed thousands of people and forced hundreds of thousands more from their homes in the mountainous region of about 5 million. Eritrea has been helping Ethiopian troops, although Eritrea has repeatedly denied its forces are in Tigray.

Ethiopian Prime Minister Abiy Ahmed has acknowledged the Eritrean presence and the United Nations and the United States have demanded that Eritrean troops withdraw from Tigray.

“Neither the UN nor any of the humanitarian agencies we work with have seen proof of Eritrean withdrawal,” Lowcock said.

GIRLS AS YOUNG AS 8 TARGETED

Lowcock said he had received a report earlier on Thursday that 150 people had died from hunger in Tigray and warned that “starvation as a weapon of war is a violation.”

Dr Fasika Amdeselassie, the top public health official for the government-appointed interim administration in Tigray, told Reuters that at least 829 cases of sexual assault had been reported at five hospitals since the conflict began.

“There is no doubt that sexual violence is being used in this conflict as a weapon of war,” Lowcock said, adding the majority of rapes were committed by men in uniform, with accusations made against all the warring parties.

“Nearly a quarter of reports received by one agency involve gang rape, with multiple men assaulting the victim; in some cases, women have been repeatedly raped over a period of days. Girls as young as eight are being targeted,” Lowcock said.

Ethiopia’s UN ambassador, Taye Atskeselassie Amde, told Reuters the government was investigating all rights violations. He accused Lowcock of “behaving not like a humanitarian but a nemesis determined to exact some kind of retribution.”

“Human rights violations are too serious and grave to be subjected to speculations. It is unfortunate the head of OCHA (the UN Office for the Coordination of Humanitarian Affairs) resorted to such an act before the UN Security Council,” he said, adding that “there is no gap in humanitarian access.”

Eritrea’s UN mission in New York did not immediately respond to a request for comment on Lowcock’s remarks. Last month, Eritrean Information Minister Yemane Gebremeskel said that sexual violence and rape “are an abomination to Eritrean society” and should be harshly punished if they occurred.