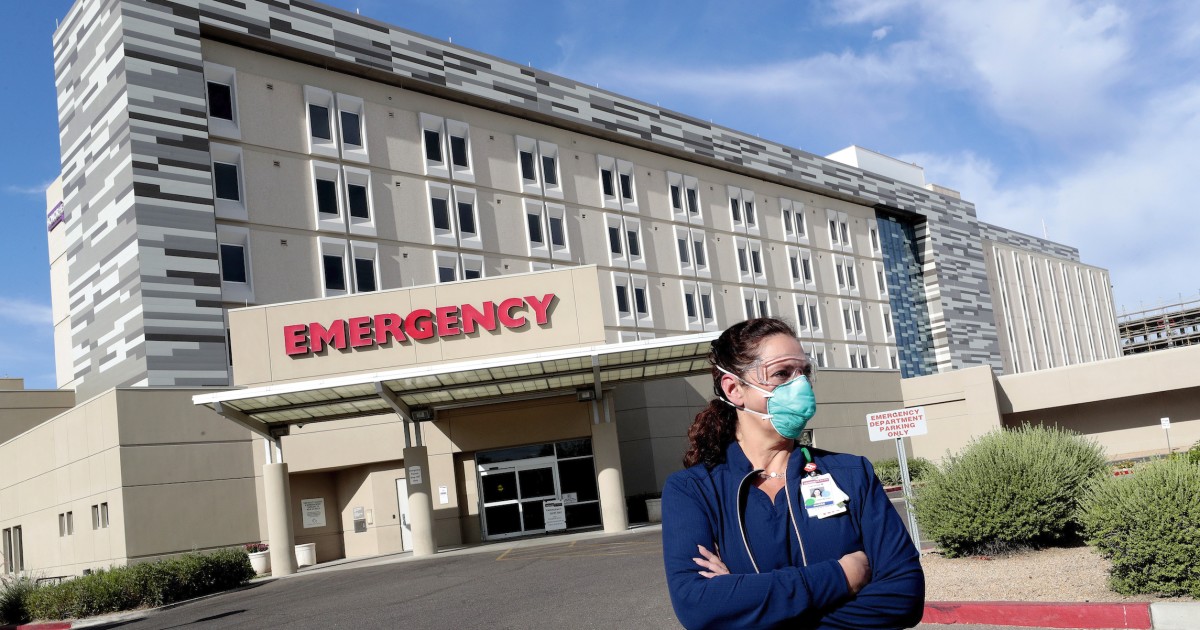 Arizona, California, and Texas recorded the highest number of new deaths in weeks on Wednesday as outbreaks worsened throughout the South and West.

Arizona recorded nearly 4,878 new cases and 88 new deaths Wednesday, a record single-day jump for the state, just ahead of Vice President Mike Pence’s visit. The previous single-day high in the number of new cases was June 23 before President Trump’s rally in Phoenix.

Hospitalizations in Arizona have also increased, with 2,516 people currently hospitalized on a seven-day average, a jump of about 35% compared with hospitalizations a week ago, CNBC reported.

In California, 107 deaths due to COVID-19 were reported Tuesday, the first time the daily death toll has surpassed 100 since June 10. In response to the worsening outbreak in California, Gov. Gavin Newsom ordered an end to indoor services in restaurants and other businesses for at least three weeks, and bars must close altogether in 19 counties.

Texas health officials reported 57 new deaths Wednesday, the most since May 14, when the state set a record for 58 new daily deaths. The state reported a record 8,076 new coronavirus cases Wednesday, surpassing Tuesday’s record by about 1,000. In total, Texas has confirmed over 168,000 cases and 2,481 deaths.

Internal messages from hospitals in Southeast Texas in the Houston area reveal that doctors and hospital staff are straining to keep up with the number of coronavirus hospitalizations, which have quadrupled since Memorial Day, according to the Texas Tribune.

At Lyndon B. Johnson Hospital on Sunday, a note sent to staff members said the hospital had run out of beds for new COVID-19 patients and key medication to treat patients, meaning over a dozen COVID-19 patients in need of intensive care were stuck in the emergency room. On Monday, the top physician executive at the Houston Methodist hospital system sent a message to staff that due to a surging number of coronavirus patients, many surgical services would have to be delayed “to create further capacity for COVID-19 patients.”

As of Wednesday, nearly 3,000 people are in Southeast Texas hospitals, including more than 750 in the ICU. Statewide, 6,533 people in Texas are hospitalized with COVID-19.

Trump reversed course Wednesday when he said that he was “all for masks” after months of showing reluctance to wear one in public. He said, “I think masks are good,” but stopped short of saying they should be mandatory.

Trump also said that “at some point, [the virus is] going to sort of just disappear, I hope.” He made a similar statement in February at a rally, telling a crowd that the virus is expected to disappear “miraculously” by April when the weather gets warmer. He added that “we’re going to have a vaccine very soon, too.”

As cases climb, more stores and businesses are choosing to pause reopening or temporarily shut down. McDonald’s will keep all restaurants in the United States closed for in-person dining for another three weeks, according to the Wall Street Journal. Around 2,200 of 14,000 restaurants allow in-person dining. Those restaurants can allow people to eat inside, but the company will prohibit additional stores from opening up for in-person services.

Apple announced it will shut down 30 additional stores by Thursday, having already closed 47 stores in recent weeks. The remaining two open stores in Florida will close, as will some stores in Texas and California, CNBC reported.

The House cleared a measure Wednesday to extend the deadline for small businesses to apply for financial relief through the Paycheck Protection Program, which was set to expire with nearly $ 130 billion in unspent funds. The application deadline for small businesses to request loans will be extended to Aug. 8. The measure will now go to Trump’s desk for final approval.