President Joe Biden is not going to achieve his hoped-for goal of getting 70% of Americans to take at least one dose of the COVID-19 vaccine by Sunday, July 4. At the same time, at an alarming rate, Black Americans are behind the curve when it comes to getting vaccinated.

This dynamic fits in with the nation’s leading infectious disease expert Dr. Anthony Fauci’s statements of “two Americas” when it comes to those vaccinated versus those who are not. 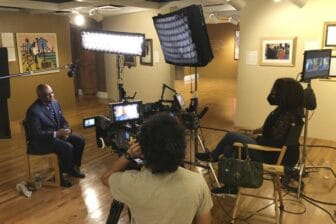 When asked by theGrio during an exclusive interview why there was not tracking of COVID-19 testing data in Black populations during the Trump administration, Dr. Fauci said, “there was a reluctance to do things by race, adding, “The reasons for that may not have been justifiable because we didn’t know what the deficiencies were.

“We didn’t know how little or much we were getting testing in African Americans,” he added. “It was something that should have been done that was not done. So hopefully now we’ll catch up with things.”

But in actuality, the NIH and the CDC have yet to catch up with the racial disparity of the pandemic. Akilah Johnson of The Washington Post recently published a story on the disparities using the City of Philadelphia as its study on Black vaccination rates. Johnson started the study with Philadelphia, which is nearly 44% Black, being on the low end of the Black vaccinations spectrum. In her reporting, she noted that the population’s rates have not caught up with White America.

“One of the things that we did for this report is there’s a Black female physician in Pennsylvania,” Johnson told theGrio. “She recorded some audio journals for us just to kind of give us the flavor and the rhythms of what was happening in the E.R. and the types of conversations that she was having with patients.”

No matter the maladies that bring people to the hospital, Johnson says the Philadelphia physician is adding the questions that so many are not. One of the problems the referenced study found is related to “census tracts that were over 80% Black.”

“So you have this huge access issue in terms of just access to information of where I can go to find out about the vaccine and schedule an appointment.” Johnson added. 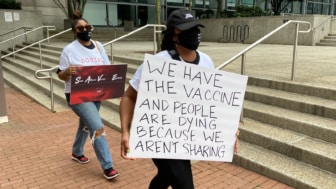 Along with not having a primary physician, Johnson contends that lends way to cultural conflicts between physicians and prospective patients due to the latter feeling “disrespected” by health professionals for dismissing symptoms, rushing informational sessions or reprimanding late arrivals to appointments.

At a time when people are being told to talk to their doctors if they are apprehensive about getting vaccinated, it’s tough to promote the vaccine in a Black population that has long had a complicated history with being underserved by the health services community.

Race is a prevailing factor in the calculations with this debilitating and deadly virus. Nationally, children who are not of age for vaccination are in a tough position as the FDA researches the safety of the vaccine for their population. But the impact appears to weigh heavily on Black children at this time.

Reports of an uptick in numbers of Black children dying from COVID-19 is leading medical professionals to sound the alarm.

Pediatrician Dr. Dan Levy of the Child and Teen Wellness Center in Baltimore County, Maryland observes, “throughout the COVID-19 pandemic, there have been clear disparities in morbidity and mortality  in the youth of color.”

“The reasons for this are multifactorial, and not fully understood, but obesity, diabetes, asthma, poor access to health care, and educational disparities all contribute,” Levy contends. “The widening prevalence of the more contagious and potentially more virulent delta strain of COVID-19 puts youth of color at higher risk.”

“It is urgent that all persons 12 years and older seek full vaccination to prevent serious COVID infection and hospitalization,” adds Levy.

Have you subscribed to theGrio’s “Dear Culture” podcast? Download our newest episodes now!